Review ~ FLIGHT OF THE WHITE WOLF by Terry Spear 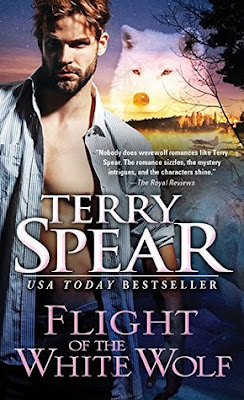 Stranded in the wilderness, these warring hearts will be forced to work together―or die together.

Gavin Summerfield―an arctic wolf shifter with a fear of flying―has to fly into the vast lakeland wilderness of northern Minnesota to track down his suspect―where his ability to shift will come in very handy. Imagine his chagrin when his pilot turns out to be the woman who tasered him last time they saw each other. Things are off to a rocky start...again.

Arctic wolf shifter Amelia White isn't entirely displeased to see Gavin again, but priorities shift when their plane is sabotaged and goes down in the middle of nowhere. As their attraction grows, Amelia hopes Gavin doesn't discover the secret she's been keeping...she knows he could never forgive her…

Flight of the White Wolf is the second book in Terry Spear’s White Wolf Series. I did not read the first one but I don’t feel like I really missed anything. This is the story of Arctic Wolf Shifters Gavin Summerfield and Amelia White. When these two initially meet, Gavin is a police officer who has been taken hostage by some thieves and Amelia is the pilot flying their escape plane. Luckily for Gavin, Amelia helps him escape his captors although Gavin doesn’t actually see her but she sees him. Several years later, Gavin and Amelia meet again while Gavin is looking for some missing dogs in his new career as a private detective. As fate would have it, Gavin has no idea who she is and they have an awkward exchange but still don’t truly meet this time either. Fast forward a few more years and Gavin ends up using Amelia’s company to fly out regarding another investigation. Still, Gavin doesn’t recognize her but this time things get real.

Flight of the White Wolf was a very unpredictable book. The chemistry between Gavin and Amelia is undeniable, but it’s the way that they finally hook up that makes the book intriguing. Amelia does everything she can to avoid Gavin but he keeps popping in and out of her life. One time, he pops in and she is wearing nothing but a towel. The next time, he ends up in a sabotaged plane with her. Clearly, they were meant to be together. Amelia is of Royal Arctic Wolf Blood Line while Gavin was turned. Consequently, they wouldn’t normally be together but the laws of attraction don’t care about that. In addition, they seem to work really well together. They have a lot of clothes on heat well before they actually get naked together. Plus, they really look out for each other as if they had known each other for years. In addition, Amelia tries desperately to keep her secret regarding their first meeting hidden. Gavin knows something is familiar about her but he just can’t put his finger on it. Not that he lets any of that get in the way. Add in the fact that they find that they have a common enemy and everything just seems to work.

I really enjoyed Flight of the White Wolf. Terry Spear put a good twist on the lore of shape shifters. There was an unexpected mystery that was woven throughout their unexpected romance. Both characters were very likeable, plus there is even an enormous dog that adds to their bond. The story was fast-paced and I couldn’t put the book down. I look forward to reading other books in the series.

USA Today bestselling author Terry Spear has written over sixty paranormal and medieval Highland romances. In 2008, Heart of the Wolf was named a Publishers Weekly Best Book of the Year. A retired officer of the U.S. Army Reserves, Terry also creates award-winning teddy bears that have found homes all over the world. She lives in Spring, Texas with two Havanese puppies.