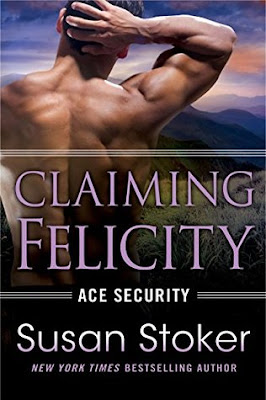 Falling in love could expose a woman in hiding, in the fourth Ace Security novel from New York Times bestselling author Susan Stoker.

Former mercenary Ryder Sinclair’s stunning discovery that he has three half brothers in Castle Rock, Colorado, is giving them all the chance to color in the spaces of their tragic pasts. For Ryder, establishing roots is made all the more desirable by Felicity Jones. But if Ryder’s instincts are correct, this breathtaking beauty is in trouble.

Castle Rock isn’t Felicity’s home. Like her false identity, it’s just a cover. All she wants is enough cash to keep moving to another temporary hideaway—to stay on the run from a secret that’s haunted her for years. As safe as Ryder’s strong embrace makes her feel, she fears that falling for him, and staying in Colorado, will put everyone she’s come to love in danger.

The more Ryder learns about Felicity, the more determined he is not to let her go. It’s time for her to stop running—even as a relentless danger closes in, threatening their love and their lives.

Claiming Felicity is the fourth book in Susan Stoker’s Ace Security Series. It can be read as a standalone but as with the other books, you will enjoy it a whole lot more if you read the other books first. I’ve read all of them excerpt for the first one, Claiming Grace. In Claiming Felicity, the Anderson Brothers are introduced to their half brother, Ryder “Ace” Sinclair. They had no idea that he existed but he knew all about them. Just like his older brothers, Ryder spent his life helping others. Oddly enough, he did it under the most dangerous circumstances.

When Ryder is introduced to the woman that the Anderson Brothers consider to be their sister, Ryder’s whole life changes. Felicity Jones is nothing like her outward appearance shows to the world. She has this tough exterior with all of these tattoos but deep down inside she is scared to death and ready to leave at any moment. Ryder comes into her life just as her past is about to catch up with her. And although he doesn’t know her at all, Ryder promises to do everything within his power to keep her safe. Coming from Ryder, that’s a lot because he is a Mountain Mercenary. The Mountain Mercenaries are a group of men who rescue abused/enslaved women and children around the world. They will stop at nothing help the innocent. Ryder has killed a lot of bad men in his day so he doesn’t even flinch when it comes to Felicity. And just as the title suggests, he claims her as his own. In the beginning, Felicity doesn’t truly know how to handle Ryder’s declaration but she quickly falls in love with him.

I really did enjoy Claiming Felicity. Ryder and Felicity have great chemistry. As with all of the other books, there is plenty of heat. The one thing that disappointed me was that there wasn’t much action in relation to taking down the bad guy. Ryder is this lethal weapon but we don’t really see him in action. Consequently, I felt like that part of his background was wasted. I can appreciate the author alluding to certain things but I felt let down. I don’t want to give away some of the best parts of the book so you will have to read it to understand what I mean. Otherwise, the book was good overall. I look forward to seeing what happens next.