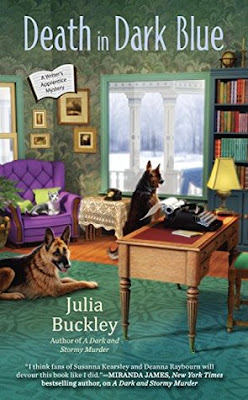 An aspiring suspense author finds herself writing mysteries by day and solving them by night in the second Writer’s Apprentice Mystery by the author of A Dark and Stormy Murder and the Undercover Dish Mysteries.

In the quaint town of Blue Lake, Indiana, Lena London is settling into her dream job, but someone is making her life a nightmare…

Things are beginning to go right for Lena. She’s got a new job assisting suspense novelist and friend, Camilla Graham. She lives rent-free in Camilla’s beautiful, Gothic house. She even has a handsome new boyfriend, Sam West.

After being under attack by the media and his neighbors, Sam has recently been cleared of suspicion for murder. Journalists and townsfolk alike are remorseful, and one blogger would even like to apologize to him in person. But when she’s found dead behind Sam’s house, Lena must dodge paparazzi as she unravels the many mysteries that threaten to darken the skies of her little town and her newfound love with Sam.

Julia Buckley’s Death in Dark Blue is a riveting page turner that will have you saying just one more page, only to realize you are done. One thing I love about Julia Buckley is her ability to draw me into a story in such a way that I read and enjoy the story for what it is. I don’t consciously attempt to solve the murder(s). I don’t spend my time second guessing the characters. I simply read and enjoy where she and the story takes me.

Death in Dark Blue continues where A Dark and Stormy Murder ends, and can be read independently. Lena London’s boyfriend, Sam West may have been cleared in the murder of his wife, Victoria, but her whereabouts still remain a mystery. Federal agencies, the NYPD, and Sam’s private investigator are all looking for her. For the most part, Sam’s life is finally returning to “normal”. That is until Taylor Brand, a blogger, one of Sam’s main accusers of murdering his wife, and his wife’s best friend writes a blog post apologizing for her actions against him and vowing to see him in person soon.

Taylor wasn’t really one of Sam’s favorite people and he doesn’t know why she would insist on seeing him in person when she’s already apologized on her blog. Unbeknownst to Sam, Taylor arrives in Blue Lake, Indiana and is ultimately murdered in his backyard. Already being accused of murder once, Sam is potentially an easy person to pin the murder on. It’s going to be up to Lena, mystery author Camilla Graham, and Detective Doug Heller to catch a killer before another victim is claimed.

Julia has written a straight-forward mystery. There wasn’t any twists and turns in discovering who Taylor’s killer was. The surprising part is why Taylor was killed. But don’t be fooled into thinking Julia didn’t add twists, turns, and surprises to this story, because she did. The mystery of Victoria West is still going on and this mystery within a mystery will leave you reeling.

I’m looking forward to the next book in Writer’s Apprentice Mystery series. I know it will be another page turner.

A Dark and Stormy Murder ~ Review

A Dark and Twisting Path is now available.