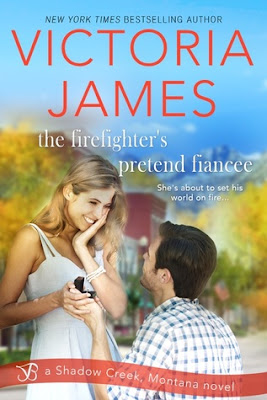 She’s about to set his world on fire...

Leaving Shadow Creek nine years ago was the hardest thing Molly Mayberry’s ever had to do…except maybe returning. She’s never regretted her choice, but a chance of a lifetime position at the local hospital means going home and facing her past, including her shrew of an estranged mother and the fiancé she ran out on. Ben Matthews is still the sexy, sweet man she left behind…and apparently still her fiancé.

Ben has been doggedly pursuing the position of fire chief since he was a teenager. There’s just one problem—he has to show his boss he’s ready to settle down. No matter how silly the condition, Ben will make it happen. And apparently so will his brother when he opens his mouth and decides to tell everyone Ben and Molly are engaged. Now the one woman he never stopped loving is living with him in a fake relationship, driving him crazy. Pretending only reminds him how right they were once, but if Ben gives in to the heat building between them, heartache is sure to follow.

Victoria James is one of my favorite authors because she makes me believe in love. She makes me believe that true love knows no distance or time. And with the right person, it can heal the most battered heart and soul. I’ve read every single one of her books (fifteen and counting) and I know each time I’m in for an emotional rollercoaster. I know Victoria is going to rip my heart apart, only to put it back together in the end. Even knowing this, I feel as though I am never prepared.

Victoria’s Shadow Creek, Montana series continues with The Firefighter’s Pretend Fiancée, the fifth book in the series. This is a standalone read, with small glimpses of past characters. For me, this book feels like the start of a new era for the series that will focus on three sisters.

The Firefighter’s Pretend Fiancée is a second chance love story. The story features second generation firefighter Ben Matthews and pediatrician Molly Mayberry. Nine years ago, the two were on a path working towards their hopes and dreams. Molly even had everything all planned out, down to the number of kids they would have and where they would live. The icing on the cake was Ben’s endearing proposal. Fast forward and the two are not on speaking terms. In fact, Molly doesn’t talk to any of her friends from Shadow Creek or her family. In the past nine years, Molly has only been back in town for a total of three days, to attend her father’s funeral. But things are about to change, in a very big way.

Molly is offered the once in a lifetime opportunity to head the pediatric department at the local hospital. This one year contract is even more impressive because she’s so young. She just has to avoid everyone from her past. Unfortunately, in a town as small as Shadow Creek, that is impossible. Ben has been dealing with his own problems. He and his family are in limbo, waiting to find out the status of his mother’s health. His lifetime dream of following in his father’s footsteps and becoming fire chief of the Shadow Creek Fire Department is in jeopardy because he’s too reckless and isn’t a family man. But as luck would have it, Ben’s younger brother Finn comes up with the solution of Molly pretending to be his fiancée to get the job and make their mother happy.

The charade of Ben and Molly being a couple gets out hand when they are forced to move in together. The close proximity reignites feelings just under the surface and make them realize they never stopped loving each other. “I don’t think a day has gone by where I haven’t thought of kissing you or missed kissing you.” But in order to move forward, Molly has to come clean about why she really broke up with him years ago and seemingly turned her back on her family and her hometown. “I am a doctor and I can fix people, and I can’t fix myself.”

The Firefighter’s Pretend Fiancée was classic Victoria James. This is a story of friendship, forgiveness (not only of others but also yourself), and redemption. It’s full of heart and passion. This was definitely a tearjerker so have tissues handy. I loved the playfulness of Molly and Ben, when they finally relaxed. Finn is a secondary character full of life, who provided humor throughout the story. He deserves to have his own book. I know who the future couples are going to be and I can’t wait to read their stories! 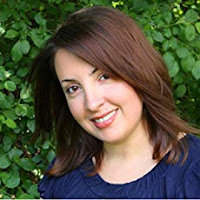 Victoria always knew she wanted to be a writer and in grade five, she penned her first story, bound it (with staples and a cardboard cover) and did all the illustrations herself. Luckily, this book will never see the light of day again.

In high school she fell in love with historical romance and then contemporary romance. After graduating University with an English Literature degree, Victoria pursued a degree in Interior Design and then opened her own business. After her first child, Victoria knew it was time to fulfill her dream of writing romantic fiction.

Victoria is a hopeless romantic who is living her dream, penning happily-ever-after's for her characters in between managing kids and the family business. Writing on a laptop in the middle of the country in a rambling old Victorian house would be ideal, but she's quite content living in suburbia with her husband, their two young children, and very bad cat.

Sign up for Victoria's Newsletter to stay up to date on upcoming releases and exclusive giveaways, follow her blog for daily antics and insight into her daily life, and get to know her on twitter and Facebook. She loves hearing from readers!