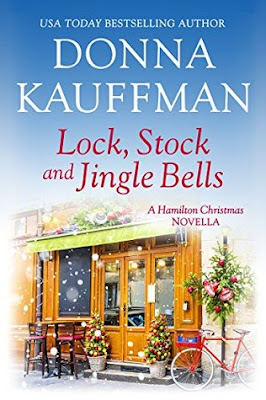 The best holiday gifts aren’t always under the tree...

Holly hates the yuletide season more than ever since she received her very early inheritance: her mother’s Christmas novelty store. Now she has to put her life on hold to deal with the shop, while her parents settle into their busy sunny Florida retirement. But Holly’s childhood pal, Sean, is determined to warm her up—to Christmas and to him. When they uncover a diary concealing secrets involving both their families, this could be the Christmas that changes their lives forever...

It's ten days before Christmas and Holly Berry Bennett finds yourself traveling across the Atlantic for the third time in roughly two weeks. Holly isn't going home to celebrate Christmas with her parents. She's returning to what's left of her parents old life, or should I say her mother’s. During her Thanksgiving visit, her parents happily informed her that they were retiring and moving to Florida. Her mother wants Holly to take over running Santa’s Workshop, an all-things Christmas and antique store. In fact, the family home has already been sold, the parents have already moved to Florida, and they are spending Christmas aboard a cruise ship. There are a couple of problems with this: 1) Holly's life and job in London and 2) Holly's isn't very big on Christmas. What's a girl to do?

While Holly isn’t a fan of Christmas, her high school crush and owner of the restaurant across the street from Santa's Workshop is. Sean Gallagher knows all about Holly’s dilemma. With a possibility that Holly might leave town forever, he decides it's now or never to confess his attraction to her.

Over quiet daily meals at the shop, Holly and Sean grow closer and closer. But things hit a snag when Holly stumbles upon a mystery involving Sean's family. As the two work on a resolution to both the mystery and Holly's future, Holly realizes that Christmas isn't so bad after all.

Lock, Stock and Jingle Bells is the second book in the Hamilton Christmas Novella series. Originally published in 2009 as part of the Kissing Santa Claus anthology, this is a story about finding yourself and your place in the world. Holly and Sean were both likeable characters and I enjoyed watching them come together as a couple.

USA Today bestseller and award winning author of the Cupcake Club series and the Blueberry Cove series, DONNA KAUFFMAN has been gratified to see her books get rave reviews in venues ranging from Kirkus Reviews and Library Journal to Entertainment Weekly and Cosmopolitan. She lives in the beautiful Blue Ridge Mountains in southwestern Virginia, where she is happily working on the next book in her brand new Blue Hollow Falls series, set right in her mountain home area. When she's not writing, she can be found recapping the popular tv show NCIS for USA Today, or escaping into her garden to play in the dirt. Donna also works as a volunteer wildlife transporter for two local sanctuaries, giving orphaned and injured wildlife a second chance at survival.