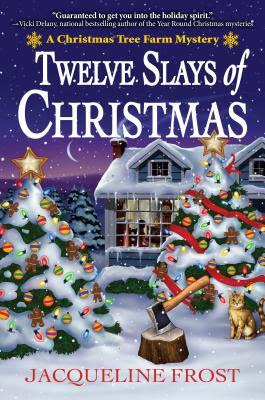 When Holly White’s fiancé cancels their Christmas Eve wedding with less than two weeks to go, Holly heads home with a broken heart. Lucky for her, home in historic Mistletoe, Maine is magical during Christmastime—exactly what the doctor prescribed. Except her plan to drown her troubles in peppermints and snickerdoodles is upended when local grouch and president of the Mistletoe Historical Society Margaret Fenwick is bludgeoned and left in the sleigh display at Reindeer Games, Holly’s family tree farm.

When the murder weapon is revealed as one of the wooden stakes used to identify trees on the farm, Sheriff Evan Grey turns to Holly’s father, Bud, and the Reindeer Games staff. And it doesn’t help that Bud and the reindeer keeper were each seen arguing with Margaret just before her death. But Holly knows her father, and is determined to exonerate him.The jingle bells are ringing, the clock is ticking, and if Holly doesn't watch out, she'll end up on Santa's naughty list in Twelve Slays of Christmas, Jacqueline Frost’s jolly series debut.

Jacqueline Frost aka Julie Chase is a new to me author. The cover for Twelve Slays of Christmas is what first caught my attention. The blurb had me wanting to read the book. I never expected to fall in love with Twelve Slays of Christmas so hard or so fast. Jacqueline made me want to visit Mistletoe, Maine and Reindeer Games Tree Farm. Her descriptions of the town and properties made it very easy to visualize everything happening.

Three days after her cheating ex-fiancé called off their Christmas Eve wedding, twenty-six-year-old Holly White finds herself back in Mistletoe helping out at her parent’s Christmas tree farm. While waitressing at the Hearth (the tree farm’s cafe), Holly overhears Paula from the maple farm next door complaining about Margaret Fenwick, the president of the Mistletoe Historical Society. It seems as of late, Margaret has been hounding various people in Mistletoe in order to make sure their businesses are up to code and Historical Society’s standards. Some of those people include Holly’s own father, Bud, who has a very public argument with Margaret. When Margaret is found dead moments later, the police suspect Bud may be involved.

From the very beginning, I loved Twelve Slays of Christmas. I loved the characters of Holly, her parents, outrageously funny Cookie, Holly’s friend Caroline, and especially Sheriff Evan Gray. Jacqueline has written a story that encompasses Christmas, with fun events and yummy snacks. The mystery was great. In fact, I was completely surprised by the who and why. I am so looking forward to the next book in this series.

Julie Chase is a mystery-loving pet enthusiast who hopes to make readers smile. She lives in rural Ohio with her husband and three spunky children. Julie is a member of the International Thriller Writers (ITW), Romance Writers of America (RWA), and Sisters in Crime (SinC).