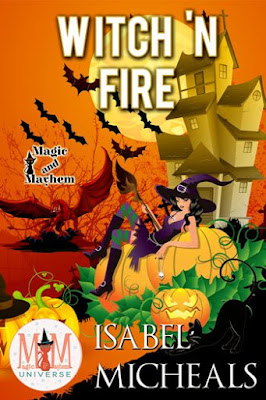 What happens in Vegas ends up in Bass Ackwards, Tennessee when a feisty, temperamental witch with wonky powers and a fire breathing dragon accidentally expose Magic in Sin City.

Zara has one objective: to win the World Series of Poker tournament in Vegas. The stakes are high and the buy-in is ten thousand dollars that she doesn’t have. Desperate, Zara does the only thing she can… borrow more money.

Stefano has been searching for the one his entire life. So imagine his surprise when she turns out to be the sexy witch who just crashed his brother’s wedding. Jealousy, magic, and chaos all interfere with this couple’s chance at happiness.

The Sire wants her powers, the loan sharks want their money, and Stefano wants her heart. The location is Sin City, the name of the game is poker, and the hearts are wild.

Only the Fates know who will win and who will fold.

Witch ‘N Fire is based on the wonderful characters found in Robyn Peterman’s Magic & Mayhem series.

Witch ‘N Fire is the second book in Isabel Micheals’ Magick & Chaos series. Set in Robyn Peterman’s Magic & Mayhem Universe, Witch ‘N Fire is the story of Zara, the third triplet of Fabio and “The Spawn of Satan” aka Cassandra/Judith/Sandy/Isobelle or whatever her true name is.

Zara and her best friend, Cole journey to Vegas to participate in the World Series of Poker. However, they get more than they bargain for when The Sire makes a play for Zara’s powers. Listening to a clairvoyant, they “follow the Magic” and find themselves in Bass Ackwards, Tennessee and into the arms of the dysfunctional family Zara never knew about.

While I enjoyed Witch ‘N Fire, I still think I need to read Zelda’s story found in Robyn Peterman’s Magic & Mayhem series. There were a couple of characters I believe came from her story which I don't understand. But oh my gosh! Witch ‘N Fire is fun with laugh out loud moments. The characters are ALL outrageous, but so much fun. I’m seriously looking forward to the next book in the series, featuring Cole.