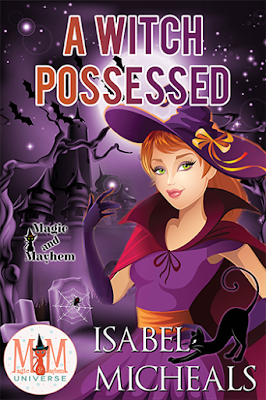 Hildy and Chuck are desperate to begin their next 'great adventure', but the Goddess and Fates have other plans… to help the witch in danger embrace her destiny.

Until the Angels of Death, a talking cat, and a leotard wearing Healer invades her home, Zoe has no clue she's been living a lie. Two claim to be ghosts, one claims to be her mate, and the other insists on her calling him dad.

Desperate to help her unconscious Aunt Viola, Zoe doesn't know who to believe. But one thing is for sure, there's a warlock named Alaric, who wants her dead… and dead she will be. When the energy balls start flying, things begin to heat up.

Will this band of misfits find common ground, or will magic as they know it cease to exist?

Strap yourself in and hold on to your funny bone because the little town of Bass Ackwards, TN will never be the same.

A Witch Possessed is an over-the-top novella based on the wonderful characters found in Robyn Peterman's Magic & Mayhem series.

I have to admit if you’re new to Robyn Peterman’s Magic and Mayhem series, like I am, A Witch Possessed is a lot to take in. Immediately, upon picking up the book, I felt like I was missing something. That something being character background and understanding the dynamics between the key and secondary characters. Once I was able to read enough to pick up on some things, the book became beyond enjoyable.

Hildy and Chuck are two mated ghosts who have had their plans for a “great adventure” put on hold, as they are ordered to look after a lady named Zoe. It seems an evil Warlock wants Zoe dead. Why you ask? Zoe, unbeknownst to her, is one the most powerful witches in the world.

A girl couldn’t have more of a worse day. Zoe arrives home to find that her aunt is unconscious, the house they share trashed, two ghosts, a putty cat claiming to be her mate, and that she’s a witch who must defeat the Warlock and save all magic. Seriously, how much can a girl take? From here, the story becomes one filled with laugh out loud humorous moments.

Isabel Micheals has written characters who are so off the charts hilarious it becomes too much, in a good way. I loved some of the secondary characters. Hopefully, one in particular will get a chance at a story.