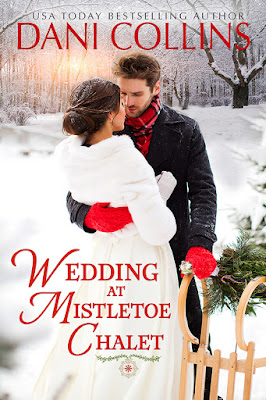 Eager for a home-style Christmas while she considers a career shift, Kristen Benz leaps on the temporary job at Mistletoe Chalet. Soon she’s wrapping presents, trimming the tree, and helping her new boss’s tween daughter plan a Christmas Eve vow renewal for her parents. The holiday is imbued with a magical glow—especially when Kristen’s high school sweetheart appears on the doorstep.

After years of medical school, Finn Garrett has promised his parents he’ll be home for the holidays. His detour to see his first love is supposed to provide closure, not rekindle their long-ago romance.

Can a matchmaking tween and the magic of Mistletoe Chalet spark the happily ever after that eluded them in the past?

Hi Dani. Welcome back to Read Your Writes Book Reviews. How are you?
Hi Kim, I’m fantastic. Thank you so much for hosting me today!

You’re very welcome. Congratulations on the release of Wedding at Mistletoe Chalet. First of all, please tell me about Mistletoe Chalet (the place).
It’s a family-run lodge that also operates snow-cat skiing, which means they have a bus of sorts, mounted on tracks. This allows them to crawl around the mountain to pockets of snow that would otherwise only be accessible by helicopter.

Tell me about Kristen Benz and Finn Garrett.
Kristen and Finn grew up next door to each other. Finn was best friends with Kristen’s brother. She felt like the tag along until her last summer after high school when she and Finn began dating. They broke up after they left for different colleges. She really thought he was The One and so did their parents and everyone else.

What makes them ready for an HEA this time around?
They acknowledge that while their feelings were real, they were both too young. As hurt as Kristen was, she realizes that time of independence allowed her to pursue her dreams and this time, they are both sure they know what they want. Finn is completing his residency, so he is more than ready to start his ‘real’ life.

What’s your favorite part of a book to write?
You mean in general? I’ve never been asked this. Hmm. I think I love best when I’m able to write a scene of intimacy. Not necessarily physically, but when I can delve into the deepest sludge of a character. When I can have them admit to something that pains them, but the other character doesn’t reject them. They help them accept that terrible flaw.

I also love when I can include some humor. We all need to laugh!!

Those can really be some amazing scenes. And laughter is always important. Tell me about one of your favorite scenes from the book and why is it a favorite?
Further to above about laughing, I had Finn tell a story from their childhood when Kristen’s brother was chased by a moose. Finn is still laughing about it and I very much hope that readers will enjoy it.

Can you tell me a fun fact or two about Wedding at Mistletoe Chalet?
#1 – Originally, I was going to write this as a crossover between my Love in Montana series and my Blue Spruce Lodge series. After chatting with my publisher about a bunch of stuff, I decided to write this as a standalone.

#2 – My parents were living with us when all of this was going on. They had been evacuated out of their home by record spring floods that kept them with us for two months! My mom helped me brainstorm the title.

Sorry about the floods. But it’s pretty cool your mom helped with the title. What’s your favorite way to spend Christmas?
I’m one of those people who finds Christmas quite stressful, probably because I’m usually trying to finish a book. I tend to prefer the season to be as low-key as possible. However, this year, my sister is coming home from Brisbane, Australia with her family. My other sister will be in town and my own kids are coming home so it will be a huge crowd, but I expect it will also be very, very fun.

That sounds really good. Hopefully, you will be able to relax and enjoy everyone. Dani, thank you so much for taking the time to answer some questions for me.
My pleasure. Thanks for having me!
Hugs,
Dani

It was her name. She even recognized the voice. But as she stopped and turned and stared through the falling snow, it didn’t compute that she was seeing who she was seeing.

He wore a puffy blue ski jacket, but it didn’t soften broad shoulders that still looked wide enough to carry the world. His brown hair had been recently trimmed. It was ruffled and growing speckled with snow. She knew that crooked grin as well as she knew her own in the mirror, but it still seemed impossible that she was seeing him.

“Finn.” He pointed at himself and frowned with disbelief, adding, “Garrett. I know it’s been a long time, but—”

She laughed. It came out a little dry, given the mixed feelings that had tumbled out of their dusty old boxes lately, but it wasn’t like she’d been nursing heartbreak all these years. She had gone on with her life and refused to hold a grudge over their juvenile relationship and inevitable breakup.

“I know who you are! I’m stunned speechless. What are you doing here?” She leaned her scraper-brush tool against the side of her car and met him midway as he walked toward her.

He didn’t answer. His gaze was sweeping over her features in a way that almost seemed greedy for the sight of her.

“You look great,” he said, making her cheeks grow warm and her heart stumble.

“You, too,” she said. Then, because she would have done it with any other old friend from home, she stepped in to offer a hug.

The way his arms closed around her was both sweet and alarming. He was her brother’s best friend and their parents were lifetime neighbors and couple-friends and workmates. His oldest sister, Sheryl, had babysat Kristen when she was little and she had known all the Garrett children her entire life. Whenever she was home, she asked after all of them, keeping tabs as closely as she did with her extended blood relatives.

This should have been a hug of familial affection. It was cushioned by their heavy jackets and gloves and neither of them hung on awkwardly long, so it wasn’t weird or sexual. It was familiar and warm.

But memories flooded through her, showering their brief embrace in a sparkle of prickling awareness. She tingled as they broke apart. She smiled, but it felt a little forced.

His grin was having a hard time sticking, too. He searched her gaze again, but she didn’t know what answers he sought.

“Really,” she managed to say. “How are you here? To hear it from Mom, you’re chained to your rounds at the hospital.”

“Turns out there are labor laws.” He held up hands in a shrug that implied, What do you know? “I do get vacation.”

“Every eight years, whether you need one or not?”

“Pretty much.” He chuckled and it almost became an easy moment of camaraderie, if not for the way he was watching her so closely. “I’m on my way to spend Christmas with Mom and Dad.” He cocked his head in the vague direction of west.

“I heard.” Why did admitting that make her feel so self-conscious? Maybe because his expression sobered as she said it. “You haven’t been home for Christmas in ages.”

“I was supposed to go to Mom’s, but my parents won the Hot Spot.”

“I heard.” He nodded and there was a long beat of silence while the falling snow muffled any sound in the world around them.

“You seem to have driven a long way out of your way so we could tell each other stuff we already know,” she said wryly.