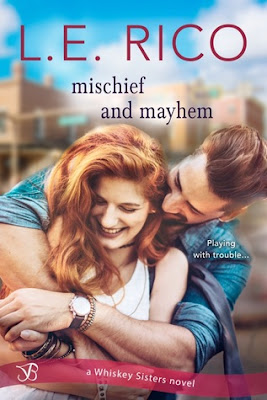 Welcome to Mayhem, Minnesota, home of the Knitty Kitty, The Little Slice of Heaven Pie Shop, and O’Halloran’s Pub—owned by the four young women known as The Whiskey Sisters.

In the wake of her divorce, Jameson O’Halloran has gone man-vegan. And this is one diet she’s determined to stick with. Even when her long-lost ex-brother-in-law shows up looking like two scoops of double dutch dipped in chocolate… She’s not giving in. Been there and still wearing the messy T-shirt.

It’s been a decade since Scott Clarke left his family and his hometown, never to return. But when tragedy strikes, he finds himself dragged back to the land of gossip, judgment, and the one woman he absolutely, positively, without a doubt can never have. His brother’s ex is off-limits. He just needs to keep repeating that to himself until it sinks in.

I fell in love with the Whiskey Sisters series with the first book, Blame it on the Bet. The story had amazing characters and was a fun read. The second book, Mischief and Mayhem is different. It's more serious, which I wasn't expecting. The characters are still great, but it isn't as fun and there aren't nearly as many humorous parts. However, this isn't to say that the book wasn't good, because it was.

Mischief and Mayhem finds Jameson Clarke newly divorced from her cheating, jerk of an ex-husband Win. Jameson is the second oldest of the O'Halloran sisters. It's in her nature to be be a nurturer. In fact, before she had her two-year-old son, Jackson aka The Adorable Terror, she was a nurse at the local hospital.

Within the last year, Jameson has lost her father and divorced her husband, but the blows keep coming when Jameson discovers her former father-in-law passed out and not breathing. She soon discovers Big Win selected her and his son Scott as his healthcare proxies. In typical Win fashion, when he learns he wasn't picked by his father, he has a fit. He also leaves Jameson on her own with the task of locating Scott, who no one has had any regular contact with since he left home ten years ago.

After his mother died, Scott Clarke found himself confused and alone. Instead of turning to his father for help, he packed up and joined Project Peace. For years, he’s done hard manual work, with the benefit of knowing he was helping people who couldn't help themselves. When he gets the call that his father is ill, he rushes back to Mayhem, Minnesota and prepares himself to face the past he’s been running from.

Mischief and Mayhem is heartbreakingly sad for many reasons. However, in the midst of the story coming together and the shocking discoveries, the O’Halloran sisters are there for each other. Mayhem may be a small town with more than its share of eccentric people, but this town is full of heart.

Once again, L.E. Rico has put me on an emotional rollercoaster. She gave me highs that made me smile. She gave me lows that either made me mad on behalf of a character or reaching for tissues. I loved Jameson and Scott together. These two both have such incredible hearts and love for their family. I don’t want to give anything away but Jameson and Scott were destined to be together.

If you haven’t read this series, I highly recommend you do. L.E. Rico has solidified her place on my favorite author list. I am so looking forward to the next books in this series.

Blame it on the Kiss ~ Review