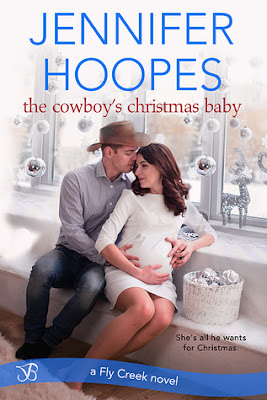 She’s all he wants for Christmas.

Stranded in the middle of the road in big sky country, Wyoming, at eight months pregnant isn’t exactly what Sofie Pennington had planned when she decided to pack up and surprise her sister. Fly Creek is a fresh start for her, one where she’s finally free from her controlling ex and can figure out this whole single parent thing. First, though, she needs to get there. To her shock, her rescuer comes in the form of a frustratingly handsome cowboy.

Dan Rigby is on his way out of town—for good—when he stumbles across a very pregnant Sofie. She’s the most obstinate, exasperating woman he’s ever met…and the most appealing. She drives him crazy, in more ways than one. When her sister suddenly has to leave, and Dan becomes Sofie’s welcoming committee, they find themselves growing closer despite their desire for conflicting things. Can Dan convince Sofie that Christmas miracles do happen?

Dan Rigby has lived in Fly Creek, Wyoming his entire life. When he was younger and found himself in a tough situation, it was Shelby and Mitchum Marks who took him in. They welcomed him into their home at Sky Lake Dude Ranch and treated him like a son. But unbeknownst to everyone, Dan never felt like he belonged. Things came to a head for Dan when Ryder Marks, Shelby and Mitchum’s biological son returned in The Cowboy’s Homecoming Surprise, after a ten year absence. At that point, Dan pretty much felt as if he was just simply “Dependable Dan”. He was “the tagalong son and friend, the man good enough for now, but never enough.” Thus, Dan felt the only solution to his problems was to leave Fly Creek. And so in the middle of the night, Dan makes his escape, only to run into a herd of cows and an intriguing, very pregnant woman.

Sofie Pennington is mad and determined. She’s mad at herself for marrying an up and coming politician who thought image was everything. She’s mad at herself for allowing her now ex-husband to take away her control and make decisions for her. Now eight months pregnant, Sofie has decided to take back control of her life. She’s determined to make her own choices and raise her son on her own, the way she sees fit. Thus, Sofie now finds herself driving cross-country to Fly Creek to surprise her younger sister Emily and start a new life. What she doesn’t expect, is to find the only road leading to Fly Creek blocked by a herd of cows.

To say Sofie and Dan’s first meeting was memorable would be an understatement. Who can forget a woman banging on your truck window, demanding you do something to move cows from the road? And that right there is where I started to have issues with the story. Sofie immediately comes off as being rude and demanding. Throughout the story, just when I was starting to like her, something would set her off and she would return to her rude and ungrateful self. While I completely understand why Sofie wants to make her own choices and do things herself, I just feel there was a better way for her to express herself. Dan is why I continued to read the story. From past books, I know him to be a man with a good heart. I really wanted to see him get his own happy ending. I just wish he didn’t have to be on the receiving end of Sofie’s verbal attacks.

Despite having a difficult to like at times heroine, I enjoyed The Cowboy’s Christmas Baby. Jennifer has written some tender moments. She’s even added in some laughs. I love that she’s left the door open for a possible fourth book, with a hero I would love to read more about. I just wish that there was more of Ryder Marks in this story. As I said before, I didn’t realize The Cowboy’s Homecoming Surprise and this story overlapped. I truly believe that if Ryder and Dan had had their much needed conversation about the past, that Dan would have been in a better place.

The Cowboy’s Christmas Baby is a standalone read. If you can get past Sofie standing in her own way of finding happiness and contentment, you will be treated to a very nice story of a family coming together.