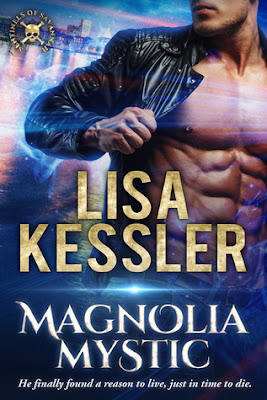 He finally found a reason to live, just in time to die.

Skye Olson is a psychic like her mother, and her grandmother before her, but a bad break up with the man she thought was her soulmate has left her confidence in her abilities shaken. While she's in crisis, a real estate tycoon from Atlanta swoops in with his eyes on her shop.

Colton Hayes spent his mortal life plundering royal ships with his pirate crew, but one holy relic changed everything. Now he and the rest of the crew protect the port of Savannah from their captain who traded his cutlass for a fountain pen.

When Colton discovers the captain wants to build a hotel in the heart of historic Savannah, he sets out to stop him, but nothing could prepare him for the violet eyes of the Magnolia Mystic.

Magnolia Mystic was previously a part of the Magnolias & Moonshine collection.

Lisa Kessler is my go to paranormal romance author. There have been times when I’ve been in a reading funk and she’s managed to pull me out. Magnolia Mystic did just that.

Magnolia Mystic is the first book in Lisa’s Sentinels of Savannah series. The series is about a group of pirates cursed to live for eternity, because they drunk from and stole the Holy Grail. For over two hundred years, these pirates have lived amongst us in Savannah, changing their appearances with the times. But times are changing, and not in the way the pirates are use to.

“A woman with violet eyes will signal the beginning and ending of your life.”  For over two hundred years, Colton Hayes has been waiting for the sorceress’s prediction to come true. In all truth, he was starting to believe the witch was wrong. But Skye Olson, the woman with the violet eyes, has been within walking distance for years. In fact, her family’s shop the Magnolia Mystic has been in the same location since the 1800’s. Skye is a psychic as was her mother before her, and her mother before her and so on.

Destiny has brought Colton and Skye together. Skye is the first woman to truly capture Colton’s attention in years. For the first time in a long time, he actually wants to explore his feelings. However, Skye has sworn off men after her ex-fiance stole from her. The tarot cards insist a union or partnership is in her future, and she now senses Colton is her future.

Lisa has introduced likeable main and secondary characters in the crew of the 1795 Sea Dog. These men have given up their thieving ways and become respectable men of society. But things change when the Holy Grail is stolen from under their noses and it seems their mortality isn’t what it use to be. It’s going to take more than a group of pirates to figure out this mystery and knowing Lisa, the Sentinels of Savannah series is going to be a wild ride. It should be noted Magnolia Mystic is the complete story of Skye and Colton. I sense the mystery of the Holy Grail will play out over several books with heroines coming into the picture to help the Sea Dog crew along the way.

The Sentinels of Savannah: