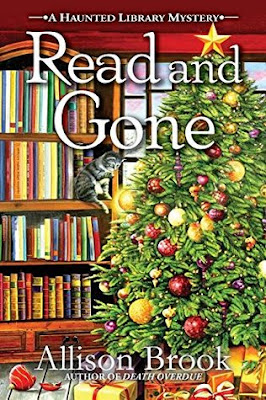 Seven-million dollars' worth of missing gems bring Carrie Singleton's long-lost and larcenous dad back into her life and it's up to Carrie to clear his name.

A devoted dad is as precious as diamonds, but Carrie Singleton wouldn't know since her dad Jim's been on the lam most of her life. In an unusual family reunion, she finds Jim breaking into her cottage in the middle of the night. The fun really starts when he begs her to help him recover his half of a seven-million-dollar gem heist he pulled off with the local jeweler, Benton Parr. When she refuses, Jim takes off again.

Carrie finds her father again behind bars for the recent murder of Benton Parr. Who made the connection? Unbeknownst to her, Carrie's boyfriend Dylan, an insurance investigator, has been searching for the gems. Determined to find the jewels herself, she starts examining every facet of Parr's life. She turns up a treasure trove of suspects, one of whom bashes her on the head as she's searching the victim's country cabin.

Retreating to the quiet confines of the library where she works, Carrie watches as Smokey Joe, the resident cat, paws at a hole in the wall. Is he after the library's ghost Evelyn, or something shinier?

I’m really loving Allison Brook’s A Haunted Library Mystery series. Read and Gone is the second book in the series, and is a standalone read. Taking place a few months after the end of Death Overdue, Read and Gone finds Carrie Singleton celebrating her birthday and preparing for Christmas.

After enjoying a successful birthday party at her small cottage and seeing everyone off, Carrie is awakened by her long lost father Jim, breaking into her house. Jim didn’t show up because he missed Carrie and wanted to reconnect with her after years of separation. He shows up because he wants her to help him get his half of stolen jewels he stole with local jeweler Benton Parr.

Things get even more complicated for Carrie when Benton is found dead inside of Parr’s Precious Pieces and Jim is seen running from the scene. While Jim may have been an absentee father, Carrie still loves him and vows to do everything she can to help him. This even includes breaking up with her boyfriend, insurance investigator Dylan Avery, after she learns he questioned her father regarding the missing jewels. With her life in upheaval, Carrie wonders if it is time for her to move on. After all, she truly isn’t used to staying in one place for long. While she doesn’t know what her future holds, Carrie knows that she must find the jewels and turn them in to prevent her father from going to prison. She’s just surprised to realize that so many people know about the stolen jewels and seem to be looking for them as well, even at the cost of their own lives.

Read and Gone was a good mystery. I found myself enjoying the story and not consciously trying to figure out what was going on. I loved that Allison kept me guessing as to who the killer(s) were up until the reveal. However, the location of the jewels was pretty easy to figure out. The secondary characters of Dylan, Uncle Bosco, and Aunt Harriet are all warm, caring, and supportive. I’m looking forward to the next book in this series. So far, Allison has covered Halloween and Christmas. I wonder what’s next.