Interview, Excerpt & Giveaway ~ LOVE AT THE ELECTRIC by Jenn Hughes 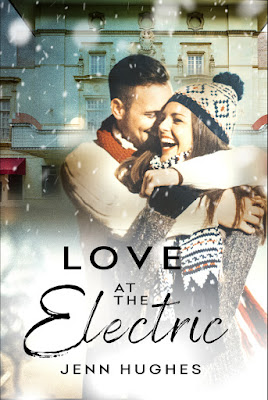 Walking wildfire Sam Owens gets Lillian hot in all the right ways, but there's more to the software CEO than just a pretty face. And a great body. And… Oh, right. He’s the enemy, according to the contract she signed with his rival. So when they secretly meet up for movies at The Electric, Lillian can't get too involved with Sam. She could lose her job. Her reputation. And her heart.

Sam is in love with his company, his image, his video games, and his ability to avoid commitment--at least until he levels up with attorney Lillian Walker. With her love of campy horror flicks and a body that makes him want to howl like a cartoon wolf, Sam’s found his leading lady. Too bad getting close to Lillian means tangling with her boss, a supervillain in the making.

In the nights leading up to Christmas, movies at The Electric mean more than just mutant toads and cannibal fruitcakes. Between shenanigans with old flames and an arch nemesis out to destroy any future they might have, Sam and Lillian learn the hard way that falling in love isn’t as easy as it looks on screen. When the past gets in the way of a perfect “the end,” there’s really only one solution--if werewolf Santas can bring them together, zombie ex-girlfriends can keep them together.

After all, anything’s possible at The Electric.

Hi Jenn. Welcome to Read Your Writes Book Reviews. How are you?
I’m great, getting ready for the holidays. I hope you’re doing well!

I’m good, thank you. What can you tell me about your latest book, Love at the Electric?
Love at the Electric is a story focusing on the developing romance between Sam Owens and Lillian Walker. They share a mutual love of cheesy horror films and fall for one another during a Christmas horror movie festival at The Electric, a retro theater in Port Bristol, Maine. But there’s a roadblock on their path to happiness—Sam’s business rival and Lillian’s jerk of a boss, Preston Lavery. A small town turned upside down by tech, cannibal fruitcakes, kamikaze seagulls, and a last-ditch effort at love culminating in an epic grand finale at The Electric make this a fun read with a guaranteed happy ending.

Tell me about the characters of Sam Owens and Lillian Walker.
Sam is the CEO of Origin Software, one of the largest tech companies on the East coast. He’s taken himself from zero to hero, disguising his geekiness for the sake of building his company, and is one of the world’s most eligible bachelors. Deep down, however, he’d rather spend less time with supermodels and more time trying to beat the next level of Firespawn.

Lillian is a patent law attorney recently employed by Preston Lavery, Sam’s college and current business rival. Her new job as one of Preston’s attorneys means more money and more opportunities, but the hours she puts in are exhausting. Lillian spends what little free time she has being the opposite of herself, which is why a horror movie festival at The Electric is so appealing.

Tell me about their first official meeting?
Sam and Lillian are brought together by Sam’s attorney and Lillian’s ex, Richard. Richard plans to convince his old college flame, Lillian, to help him make his almost-ex-wife jealous, so he invites her to Old Henry’s Pub to catch up and beg for help. He asks Sam to join them as a potential escape hatch, an excuse to get out of spending time with Lillian if he sees that she’s not quite as good-looking as her social media photos imply. (Hint – Richard’s kind of a jerk.) But as soon as Sam sees Lillian, he’s ready to give up a self-imposed no dating during the holidays to avoid relationships rule.

That sounds interesting. What do you love about them?
I love that they’re a little older than a lot of couples in the romance genre. Sam’s thirty-five and Lillian’s thirty-nine, and I like reading about heroes and heroines who are in my age range. I also love that they’re pretty honest with one another, even when it hurts. They don’t play games (well, Sam does but only video games), and they’re both mature enough to realize that they can’t have any kind of relationship when they aren’t able to admit the truth to one another.

That sounds refreshing. There’s this character named Ravi. What can you tell me about him?
Ravi is Sam’s business partner and best friend. They’ve known one another since college when Ravi was a fourteen-year-old genius, and Sam was a lonely outsider. Ravi’s…different. He’s socially unconscious and says whatever he thinks with complete disregard for how it may sound or affect others, but his out-of-the-box view of the world makes him a gifted advice-giver.

I like Ravi already. Love at the Electric is the first book in your Port Bristol series. What can readers expect from this series?
The series is wholly based in Port Bristol, Maine, so the other books continue to build upon that weird, fun, big-little town. You’ll see old characters interacting with new characters, and you’ll be introduced to more quirky town traditions. And a villain who got knocked down a few pegs in Love at The Electric will continue to torment the town and its citizens. Luckily, some plucky characters are more than capable of stopping him.

Tell me about your favorite scene and why is it a favorite?
One of my favorite scenes is when Lillian has dinner with Richard at the farm-themed restaurant, and chickens are clucking in the background while they eat. There’s this strange trend of restaurants serving food on everything but plates (they use shoes or bricks or shingles instead), and so they receive their meals on farm and gardening equipment. Lillian is not having it when her dinner is served on a shovel. She would have been better off having popcorn at The Electric with Sam. 😃

Oh. That sounds very appealing. No. Not really. What are some fun facts about Love at the Electric?

Jenn, thank you so much for answering some questions for me. Love at the Electric sound really fun.
Thank you for all the excellent questions! I had fun answering them!

Lillian squinted through the peephole. Not her sister’s latest fashion fad blocking the view. Definitely not Richard’s red head. Instead, a blue eye the color of glacial ice peered back at her. Completely unmistakable.

“Lillian?” Sam asked, thumping on the door again. “I’m trying to find Lillian Walker. If I have the wrong place, say so.”

Kind of impossible to avoid you if you show up at my front door.

She looked down and assessed the current state of her appearance. Her pajama top had a noticeably large spot of dried ice cream on the front. She ran her hands through her hair. Her fingers collided with a forgotten ponytail, turning it into a dangling mess. Even if she wanted to see Sam Owens, it would be a cold day in hell before he saw her like that. The moment demanded no-holds-barred lying.

She lowered her voice, deep and rough like a bar bouncer, and shouted back at Sam, “Wrong place, man. Get lost.”

Silence. She looked through the peephole again and saw Sam squinting back at her.

“Is it weird you saying that to me in a man’s voice turns me on?”

“What!” It slipped out. Undisguised.

“Aha! I knew it was you. C’mon, Lillian, if you won’t let me in then at least listen to me. I need to say this, and then I’ll leave. I promise,” he pleaded.

Lillian stood frozen in place, her eyeball pressed up against the peephole. Every instinct in her body wanted to throw the door open and let him in. Forgive and forget and move on. But a very annoying little voice whined shrilly in her brain, ordering her to…

Take that shirt off before I rip it off of you… No. Wait. That’s not right.


Purchase Love at the Electric from:
Amazon | Paperback | Goodreads 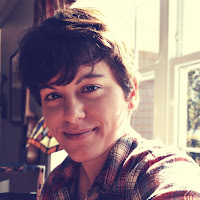 Jenn Hughes writes romance with a heavy dose of humor. A lifelong love of all things sci-fi, combined with her day job in marketing, IT, and graphic design, infuses her writing with tech-centric and geeky references.

When not reading and writing, she enjoys spending time with her family and gardening at her home in North Carolina. You might also find her gaming, repairing computers and electronics, experimenting with mixed media art, or finishing furniture.

You can follow the Love at the Electric Blog Tour here.

a Rafflecopter giveaway
Follow
Posted by Kim at 1:24 AM