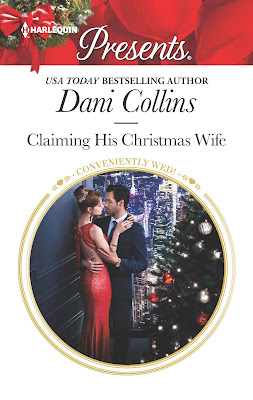 Until he wants her — forever!

After their secret marriage ended in heartbreak, billionaire Travis Sanders never wanted to see Imogen again. Yet when Imogen faints in the cold New York snow, Travis is called to her very public rescue! To avoid a media scandal, they must agree to a temporary reconciliation—at least until Christmas. But with their intense heat still burning, Travis is tempted to reclaim his wife—for good!

Travis Sanders and Imogen Gantry were married for an extremely short amount of time. They didn’t marry for love or even as business arrangement. In fact, Travis insisted that they keep their marriage a secret. Even his family didn't know. When the two parted, Imogen left the marriage a very rich woman with a broken heart. Travis left the marriage feeling bitter and betrayed.

Fast forward four years and Imogen is found passed out on a street in a very bad part of town. While going through her things, the hospital finds her marriage certificate to Travis and assumes the two are still married. When a phone call is made to Travis, he's curious as to why he's been called. He ends up at the hospital where his name is recognized and the fact that his wife is in dire straits is frowned upon. Ultimately, taking Imogen back to his apartment to recover, Travis hatches a plan to save his image and explain Imogen being in his life.

I really like the characters of Imogen and Travis. They are both beyond flawed. Their pasts have played a huge role in making them into the people they are today. With statements like “You, Imogen, are the only mistake I have ever made.” Makes Travis a bit of a donkey's behind. At times he comes across, in my opinion, as being emotionally abusive. For her part, Imogen is one of my favorite heroines. She's a contradiction. Her entire life she's been emotionally abused by those who should have loved her. At her core, Imogen is a true survivor. She's smart, witty, is ready with a snappy comeback, but most of all, she's loyal.

Now, you might be wondering how I can love a book so much, where the hero is a real jerk. It's easy. From the beginning, you can see small glimpses of Travis caring, if not loving Imogen. There's also the matter of his childhood that has distorted his view of love. The part of the story that really got to me was Imogen and her life. I went into reading Claiming His Christmas Wife wondering what was going to happen with these two. Never in my wildest dreams did I expect for my heart to break. Imogen's past brought unexpected tears to my eyes. When Imogen and Travis finally let down the walls they've built up, their romance is beautiful.

If you’ve read other Harlequin books from Dani then you're in for a treat. Travis's sister Gwyn and her husband Vito from Brought by Her Italian Boss make an appearance. However, Claiming His Christmas Wife is a true stand-alone read.

I highly recommend that before you sit down to read Claiming His Christmas Wife that you make sure you have tissues handy. The ending will definitely get you.

You can read my Claiming His Christmas Wife interview with Dani here.