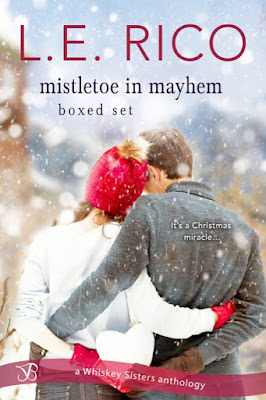 Travel to the quirky town of Mayhem, Minnesota, with these two companion novellas that prove love, and sisterhood, will always save the day.

A Christmas Wedding In Mayhem
Christmas Chaos
You’re cordially invited to the wedding of the century! Please join bride-trying-not-to-be-a-zilla Hennessy O’Halloran and her prince-in-shining-snow-boots as they finally say, “I do.” Unless a rogue wedding planner and a blizzard that takes out the entire Midwest can stop them, these two will get married on Christmas. The town of Mayhem will make sure of it.

A Surprise Baby In Mayhem
Baby Bedlam
The town of Mayhem, Minnesota, is about to have a population explosion…and the Whiskey Sisters are getting more than they expected! While newlyweds Henny and Bryan are anxiously awaiting not one but two little bundles of joy, Jameson and Scott are focusing on planning their own perfect wedding, with only one troublesome toddler in tow. But babies have a way of arriving on their own schedules…and fate has a way of intervening in this quirky hamlet. Now, the couple finds themselves scrambling to beat the clock—and the odds—to their own happily ever after before their unexpected special delivery arrives.

A Christmas Wedding In Mayhem

Hennessy O’Halloran and Bryan Truitt are one of my favorite couples. I know that when they are around laughter is sure to follow, along with a few tears. A Wedding in Mayhem finds Hennessy and Bryan planning their Christmas Eve wedding. While Hennessy wants something small and simple, Bryan wants big and flashy. He even calls on a former LA client known to put on grand events to plan their wedding. From the start, Hennessy and the wedding planner clash, but things turn murderous when the wedding planner threatens Hennessy’s nephew, Jackson. Now, Bryan and Hennessy find themselves without a wedding planner and less than two weeks before the big day.

Hennessy and her sisters are shocked to discover the former wedding planner has cancelled ALL of the previously agreed upon wedding plans. The O’Halloran sisters find themselves having to start from scratch, with only the church still confirmed. Hoping to make up for the wedding planner debacle, Bryan falls on his proverbial sword and asks the residents of Mayhem for help. To his surprise and relief, they agree. But not only do they agree, they all band together to make Hennessy’s wedding beyond special.

Get your tissues ready, because the road to the altar promises to be a bumpy one. With spirits and memories of those who have past, the “I do’s” of Hennessy and Bryan prove to be even more sweeter. It should be noted that while Hennessy and Bryan’s love affair started in Blame it on the Bet, A Christmas Wedding in Mayhem can be read as a standalone.

A Surprise Baby In Mayhem

Jameson O’Halloran and Scott Clark have been through a lot. In Mischief and Mayhem, the couple confessed their love for one another and got engaged. The couple has even been on good terms with Jameson’s ex-husband and Scott’s brother, Win. Surprisingly, the three have learned how to co-parent two-year-old Jackson together. Scott is ready to set a wedding date, but as always, Jameson is putting others ahead of herself. When one of Scott’s friends from Project Peace visits and informs Scott that he’s taking the job previously offered to Scott, Scott starts to wonder if he’s really ready to give up his nomadic life. As the title states, there is a surprise baby coming to Mayhem. Jameson, Scott, and Jackson are in for a quite a few bumps in the road.

Jameson and Scott’s story isn’t as laughable as Hennessy and Bryan’s story is. However, don’t think there aren’t some laughable moments, because as long as Jackson is around there are antics. L.E. Rico has written some dark moments in to this story. But she does an amazing job of balancing the story with laughter and sarcasm; hello Walker and Bailey O’Halloran. L.E. has also introduced a new character, who I hope is the future hero to Walker’s heroine.

I love L.E. Rico because she makes me laugh and cry. I never want her stories to end. The Mistletoe in Mayhem Boxed Set can be read as standalone. However, for readers like me who LOVE revisiting characters and their lives after “the end”, this is perfect.

Blame it on the Kiss ~ Review
Mischief and Mayhem ~ Review

You can read an excerpt from the Mistletoe in Mayhem Boxed Set here.