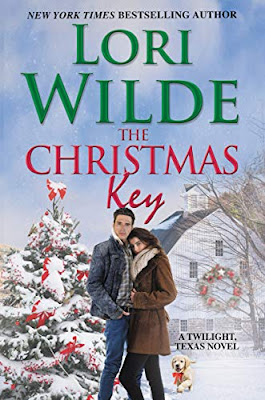 There’s a legend in Twilight, Texas. If you sleep with a kismet cookie under your pillow on Christmas Eve, you will dream of your one true love.

It’s impossible! Naomi Luther was standing face-to-face with the man she’d dreamed about over a year ago. Was it the magic of kismet Christmas cookies that brought him to her? Or is there an even greater force at work? All Naomi knows is she is falling, hard and fast, for the one man all good sense says she should not have.

Rebellious Mark Shepherd found order in the Marines but chaos on the battlefield. In a mission gone wrong, Mark is injured and one of his fellow soldiers loses his life. Haunted by guilt, he arrives in Twilight to keep a solemn promise. But when the Luthers mistake him for their handyman, he’s swept up in playing Santa to his buddy’s orphan son . . . and falling hard for Naomi’s irresistible bright spirit and sweet, sexy smile. But what will happen when she learns the truth?

It's been over 5 years since I last read Lori Wilde. I'm so happy that her writing style and voice hasn't changed. The Christmas Key was a wonderful story full of love, friendship, family, and forgiveness. Welcome to Twilight, Texas “This is where the healing begins.” I'm new to the Twilight, Texas series. Thus, I can safely say the books are standalones. Readers of this series will be happy to see past characters show up to help drive the story.

A year ago, on Christmas Day, Mark Shepherd’s life changed in one of the worst possible ways. In a rescue mission gone awry, his contingent of Marines were attacked. One was killed, Mark and another Marine were seriously injured. Mark has battled back, but he's left disabled and guilt-ridden. Forced to retire from the Marines, Mark finds himself not knowing what to do with the rest of his life. When he's told Clayton Luther left a letter for him in his possessions, Mark is filled with dread. Clayton's letter asks Mark to personally deliver a key to his family in Twilight, Texas, telling him that they will know what to do with it. With Mark feeling responsible for Clayton's death, he knows it's the least he can do.

They say it's not just the person in the military who makes a sacrifice, but also their family. Naomi Luther is definitely sacrificing a lot. Naomi is not only sacrificing time and money to send care packages to her younger brother Clayton, but she's also sacrificing her time, energy and life after Clayton is killed and his young wife Samantha dies. Naomi has chosen to adopt Clayton's son Hunter, even at the cost of losing her long-term relationship with her boyfriend.

Feeling nostalgic, Naomi places a kismet cookie under her pillow, while half a world away Mark does the same at Clayton's urging. “If you sleep with a kismet cookie under your pillow on Christmas Eve, you will dream of your one true love.” Naomi's shocked to not dream about her high school sweetheart, but a stranger she's never seen. Mark isn't sure what to make of his dream. Both Mark and Naomi are shocked when almost a year later, they come face-to-face and realize the person they dreamed about is real. “There's magic afoot in Twilight.”

When Mark meets Clayton's father, he’s mistaken for someone else. Figuring he can help out the Luther's with various chores, Mark goes along with this assumption. He knows he has to tell the Luthers who he really is, but he doesn’t want to ruin the family’s first Christmas after the death of their loved ones. Mark becomes friends with a couple of other vets in town, who he tells his truth to. Over time, Naomi and Mark also start to acknowledge their attraction for each other. “He's a man who strives to do the right thing.” But when the truth comes out it's a bitter pill for Naomi to swallow. There's no way she can be in love with a man who killed her brother. “Forgiveness is a powerful tool.” It’s going to take forgiveness and redemption to bring these two together.

The Christmas Key was simply a wonderfully amazing story. The characters of Naomi and Mark are so easy to like and feel for. The secondary characters are equally as great. “Love is a great mystery.” It's also a journey. Mark and Naomi’s journey to true love is a difficult one. It's filled with happiness, heartache, guilt, and pain. But most importantly love. Prepare to smile, laugh, and cry as you read and enjoy The Christmas Key.