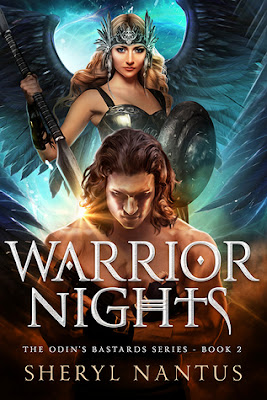 Liam Wolfson, the professional assassin, is dead. His new persona, Jack Hammerson, lives in a small town in Colorado, happy helping out as many of the townsfolk as he can. It’s his way of working toward some kind of redemption for his sins. Until one night when an amnesiac woman falls into his arms, calling out his old name...

Kara remembers nothing about her previous life, only brief glimpses of an old lover and their time together... but she knows her fate is entwined with Liam's. Then there’s the familiarity with all things Valkyrie and Valhalla. She worries she might be going crazy.

Liam has worked hard to hide all traces of his old life but Kara rips old wounds open as their old feelings for each other come rushing back. But it's not just Kara who's come to town looking for answers. When mercenaries arrive looking for Liam, he’ll need Kara to remember what she’s capable of if either of them is going to survive...

Sheryl Nantus has solidified herself as one of my go to fantasy/paranormal authors with Warrior Nights. This is the second book in the Odin’s Bastards series and is truly a standalone read. Surprisingly, I found myself a little disappointed that Brenna and Eric from Her Alpha Viking did not make an appearance. However, I can completely understand why they didn’t.

In Her Alpha Viking, Kara was cast in the villainess role. She took her mission regarding Brenna and Eric too far. The result was her banishment from Valhalla. Now she has been cast down to Earth with no memory of her past or how she ended up on the doorstep of Liam Wolfson.

After leaving the military, Liam’s only skillset was killing. He turned that into a lucrative career as an assassin. Liam excelled at his job, until one day a series of events made him rethink his life. Liam walked away from everything, including his last contract, without completing the job. He changed his name and is now on the run. “To try and erase the red from my ledger. I help who I can when I can.” For the past year, he has been Jack Hammerson, working at a bottling company and helping out where he can in the small Colorado town of Everett’s Ridge aka the Ridge.

On a stormy night, he awakens to hear a strange noise outside his door. Upon opening the door, Kara stumbles into his arms calling him Liam. He immediately recognizes her, but the question becomes how did she find him. It’s true the two met over a year ago in Las Vegas and spent a no-strings attached week together, but they parted ways without any way to contact each other. If Kara can find him so can his enemies. In his gut, Liam knows this can only mean his past is catching up with him. “When it’s the right time, you will remember.” Enlisting the help of the local sheriff, Kara and Liam wait for answers about who she is. They also discover the passion they felt in Las Vegas still burns hot.

When they least expect it, Liam's past reappears in the form of The Sons of Cain, a mercenary group known for their perfect success rate. With a massive winter storm cutting the town off from help, Liam and Kara must figure out how to save the town and the people they have grown to love. “Tell me how we can save the Ridge.” Start by remembering who you are and what you once were. “I’m a warrior. I don’t retreat or surrender.” Well then. “Fly Valkyrie, fly. Fight for what you love. For who you love.” And so with the lives of those they love and care about on the line, these two warriors go to battle, knowing it could very well be their last. May the Gods be with them as they fight to redeem themselves and save the town and its people.

I loved Warrior Nights. My biggest complaint about Her Alpha Viking was that I didn't feel it was intense enough. Warrior Nights made up for that. It was intense, with the added bonus of a little suspense. From the beginning, I was rooting for Kara and Liam. Sheryl did a really good job of showing readers how Kara and Liam became the people they are today. I liked that we were introduced to Dark Valkyries and got a glimpse of what their lives are like. Warrior Nights wasn't predictable. In fact, one of the reasons I loved it so much was the twist thrown in.

The heroine of the next book is introduced in this one. There was just enough of her to know that her job is wearing on her. I hope I’m correct in sensing that the next book is going to be epic. Seriously, I wish I could read it now. The Odin’s Bastards series is binge worthy and definitely belongs on your keeper shelf.

You can read Sheryl’s Warrior Nights Guest Post and an excerpt from the book here.