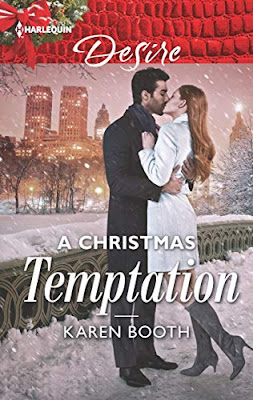 Somewhere behind the expensive gifts and grand gestures...was the man who had once been her whole world.

Sophie Eden refuses to sell her family's legacy, especially not to Jake Wheeler. He and Sophie have history--a night of passion that first left her elated, then heartbroken. Now the New York heiress wants him to stay away. But when they're snowed in for Christmas, they surrender to temptation. Meanwhile, a secret waits to tear them apart...

Karen Booth’s A Christmas Temptation is the first book in her Eden Empire series.  The story sets up the series quite nicely with mistrust, greed, and revenge waiting to be served up.

Over thirty years ago, Victoria Eden created Eden’s, a large three story department store in Manhattan.  At the height of its success, Eden’s had seventy six stores in twelve countries.  Now, with the downturn in retail, only the original store is left.  Dying unexpectedly, Victoria’s vast estate is expected to be passed on to her granddaughters, Mindy and Sophie.

Sophie Eden has spent the past several years working side by side with her grandmother, helping her run Eden’s.  For her, Eden’s is in her blood and working for the company is what she was meant to do.  But her older sister doesn’t have the same feelings.  Mindy has her own successful company, and once the will is read wants to sell the company and become a billionaire.  Still reeling from the sudden death of her beloved grandmother, Sophie is inundated with calls and gifts from investors looking to buy Eden’s.  They aren’t looking to take over running the store.  They’re looking to buy the building and the land it sits on.  But Sophie is determined to keep the store and continue her grandmother’s legacy.

One of the investors looking to buy the store is Jake Wheeler.  Jake was Sophie’s best friend in business school and also the man who broke her heart.  The two haven’t spoken to or seen each other in eight years.  But now Jake is back, acting like they’re still friends and that nothing happened between them.

Mindy is convinced Jake is the one who can get Sophie to agree to sell.  When Sophie goes to their grandmother’s upstate New York estate, Mindy tells Jake where to find her.  A snowstorm blows in, trapping Jake and Sophie for the weekend.  The two reconnect as friends and much more.  With the two wanting different things for the department store, their budding relationship is already strained.  When trust issues surface, the two will have to decide if they should follow their hearts or their minds.

A Christmas Temptation is a truly enjoyable story.  I was surprised to find the story to be a sensual read.  I loved every second of it. Sophie LOVES Christmas and the holiday season.  Jake, not so much… “I know you’re going to think I’m crazy, but I hate Christmas.”  To Sophie’s shock the man of her dreams has a heart two sizes too small.  But Jake soon discovers that Sophie is like a beacon of light, “You make me feel hopeful.”  Prepare to fall in love with A Christmas Temptation.