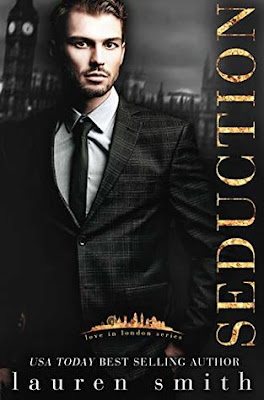 Her mind should be on school—Cambridge!—and her grades—Yikes! Instead all she can think about is him. Tristan Kingsley. It’s not his money or his title…it’s not even his panty-dropping good looks. Kat loves Tristan because he’s unguarded, sharing his emotions, his desires, and his dreams with her. But it seems Kat inherited the unlucky-in-love gene. Her father and Tristan’s mother are now dating, which means she’s spending Christmas break in the same London townhouse as Tristan. But Tristan’s father, the Earl of Pembroke, wants more than an American college girl for his son, and it would take a decree by the Queen herself to change his mind.

Christmas break should be relaxing and fun…

For Tristan Kingsley it’s a living hell. He can’t think about Decking the Halls when the girl of his dreams is staying right across the hall! But her father wouldn’t approve of Tristan’s roguish reputation as a London playboy, and despite agreeing to keep their relationship secret, stolen moments aren’t enough. Tristan can’t keep his hands off Kat, and when a fairy tale style picture of them kissing hits the London newsstands, they know it’s only a matter of time before their families discover the truth.

No matter how much Kat and Tristan want to be together, fate isn’t on their side. Unless something changes, it looks like both of them will soon be members of the Sgt. Pepper’s Lonely Hearts Club.

Well, hello darling. I can assure you it is a pleasure to be here. *winks roguishly*

I wanted to interview you because your story fascinates me. Yeah, I know, easy for me to say. In Forbidden you met Katherine Roberts. What intrigued you so much about her?
Well, you see I went to this little pub to meet my cousin Celia. It was cold and snowing outside and I stepped into the pub and went to fetch a pint of beer. That’s when this lovely, and quite adorable little creature slipped on some wet floor and I caught her just in time. There was something in her eyes, they were bright and so full of thoughts. For the first time in my life I was fascinated by a woman. You see, I had a reputation of getting around. But one look at Kat and I was…lost. I needed to see her every smile, feel her every kiss, and never let her out of my sight again. She is brilliant, kind and bloody sexy as hell. I’d have to be a madman not to want that.

Forbidden ended with a crushing discovery for you, Kat and readers. I felt your pain. What was your initial reaction?
Finding out the perfect woman I can’t live without is going to be my stepsister? It fucking ripped me apart. I know my mother wouldn’t have a problem with me dating her fiancé’s daughter. But Kat is American. Her dad is protective. Like show up with a shotgun outside her door protective. How can I be with her when I know he’ll be watching my every move?

Carter (your best friend) and Celia (your cousin) have an attraction, which has been going on for awhile. Do you think they'll ever act on it?
I bloody well hope so. Poor Carter has been mooning over my cousin for almost twenty-years. Sure, he’s slept with plenty of women, like I have, but there’s only one Celia and he’s never had the chance to be with her. If he could be with her, he’d never let her go. I’d back his play if he went after her.

What can readers expect from Seduction, as far as you and Kat go?
Hot shower sex. Lots of it. I’m not joking, you have to see just how well I treat my woman. Oh, and we do a great thing for charity and pose in a photoshoot. I get to kiss Kat in a snow glen while she rests in a glass coffin holding an apple and pretending to be Snow White. It was a fantasy I didn’t even know I had. And I spoil her by taking her to see a live butterfly exhibit. I can’t say more than that, except to read on. You know you want to *grins.*

Careful, Tristan. You don’t want to give too much of your seduction away. Your love story with Kat is a tormented one. Your creator, Lauren Smith tells your tale over the course of three books. The first two end in cliffhangers. Tell me, did you ever whisper in her ear and say, "Bloody hell, woman. What are you doing to me? To us?"
Not quite, but I did say that everything I am, I would give up to be with her. Everything. Because once my father finds out I’m dating an American with no social connections, no title and nothing to help him in his political ambitions, he’d threaten to take away everything from me if I didn’t break up with her. That’s a bloody hell of a lot to lose and I would give it all up if she asked me to.

At this moment, what do you think of Lauren?
I never trust writers. They dig into our hearts and minds, uncover our darkest secrets, our most painful memories. But then again, Lauren has promised me I will get to keep my Kat and that I will get the fairy tale ending she’s promised. I suppose I’ll have to trust her.

I do believe you and Kat will have a happy ending. I know it’s going to be a rocky ride. I can’t wait to see how it ends. I also hope Celia and Carter get their happy ending as well. Thank you for the interview.

Kat had just stepped out of the shower and wrapped a towel around her body when she heard the doorknob rattle.

“Just a minute!” It was probably her dad trying to check on her.

“Almost done,” she said as she tucked the towel more firmly about her body, mentally smacking herself for forgetting to pack her long robe.

When she unlocked the door, it flew open instantly. A shirtless Tristan stood there, holding a towel, looking down at her with those hypnotic blue-green eyes.

Her eyes, without approval from her brain, swept down over his body: the sculpted abs, the indentations of his pelvic muscles, and the way his jeans hung low on his hips. Hips she’d held and dug her nails into the other night as he’d pounded into her. Her lower body twisted and clenched with sudden desire at the mere memory of his raw, powerful possession of her. She couldn’t forget the feel of his body, pressing her down, his cock filling her until she couldn’t breathe. The way he’d owned every part of her.

Damn. How had she convinced herself that avoiding him was a good idea? Right now she wanted to drop the towel and beg him to take her, damn the consequences.

“Are you finished?” His tone was pleasant. No hint of fire, no branding scorch of his gaze…just politeness. He was doing exactly what she’d asked him to do. Treat her like a stepsister he’d only just met. Before today’s awful revelation of their parents’ engagement, he would have smirked at her, teased, and tried to steal the towel… A pang of longing for the playful part of him swept through her. God, she missed that.

What would it take to win one little smile from him, one that was meant for her, and not tempered by his polite distance.

I asked for this. It didn’t make her feel any better.

“I’m done.” Heat rushed to her face from embarrassment at her inner thoughts. Thankfully he had no idea how conflicted she was feeling right now. Or how her body was reacting to being so close to him and being denied his touch. Like a thirsty woman crawling across a Saharan desert and glimpsing an island oasis only to discover it was a mirage.

He made a low, gruff noise, not exactly a response, but it sent shivers through her. She couldn’t forget the sounds he’d made in bed two nights ago. He’d been half-animal, growling, nipping, showing her a rough side to passion, one she knew she would always crave. Tristan had pierced a dark part of her sexual side, exposing it to the light, and she couldn’t deny that it existed, nor did she want to.

He slid past her, their bodies brushed in the narrow space of the doorway. Heat exploded through her, and she froze, trying to control her reaction to him.

Tristan froze, too, their bodies pressed close. His warm breath fanned her cheeks and his natural masculine scent enveloped her. Memories of their night together came flooding back, no matter how she tried to keep it out.

He lifted his hand to her cheek, pausing a second before he would have touched her. She met his gaze, her breaths shallow as his lips twitched in a ghost of a smile. Then he brushed his knuckles over her skin. Fire rippled in the wake of that “barely there” caress. Every part of her was aware of him and his closeness.

Would it be so hard to keep a relationship between them a secret from their parents? Maybe they could…

“Please…” she begged, unsure of what she really wanted.

“Please, what?” he replied, in that dark, low tone that made her purr inside like a cat in heat. He slowly backed her into the wall next to the shower, closing the door behind him. He placed his hands on either side of her head, caging her in, and lowered his face to hers.

A feather-light, teasing kiss. A nip at her bottom lip. She clenched her thighs together, feeling the rush of wet heat in response to his subtle aggression. How could he affect her like this? His touch, his kiss, sent her body into riotous waves of longing for him.

He nuzzled her neck, licking and nibbling on the sensitive spots that sent electric pulses from her head to her toes.

Kat grabbed his shoulders, digging her fingers into his hot, bare skin. The towel around her body stretched against her breasts as she struggled to control her breathing.

His hands dropped from the wall to her waist, tugging on the folds of the towel that barely covered her.

It would be so easy, he could lift my towel up and fuck me right here against the wall. Just one more time, we could…

The towel dropped to the floor.

The Love in London Series:

You can read my Forbidden interview with Lauren here.