Review & Excerpt ~ THE GOOD ONES by Jenn McKinlay 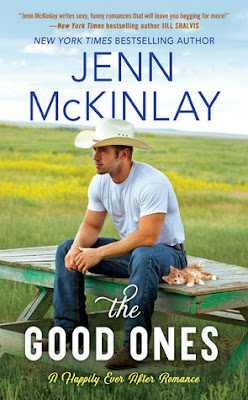 A romance bookstore owner finds her own happily ever after with a single dad in a new romance series from the New York Times bestselling author of Every Dog Has His Day.

Ryder Copeland is an accomplished architect and one heck of a father...not to mention tall and sexy. He's everything a hero should be, and Lord knows, Maisy Kelly has read enough of her great-aunt Eloise's romance novels to recognize one when she sees one. But like all fairy tales, Maisy can't help but wonder if this Prince Charming is too good to be true...

Ryder is drawn to the shy, curly haired professor who hires him to convert the Victorian house she's inherited from her aunt into a romance bookstore. Attracted to a woman for the first time since his divorce, Ryder finds himself wishing for a future with Maisy that he knows is impossible. Ryder has never wavered from his plan to leave the small town of Fairdale, North Carolina, so he can give his daughter the life she deserves. But suddenly he's not so sure. And the closer he gets to Maisy, the harder it's going to be to walk away...

Jenn McKinlay's The Good Ones is a romance lovers dream. Maisy Kelly inherits her great-aunt Eloise's three-story Victorian home in Fairdale, North Carolina. Not only is the house furnished, but it's stacked with books. Actually, that's an understatement. The house is a hoarder's paradise of books. Not your average run-of-the-mill books, but romance books. After leaving her teaching job at the local college, Maisy has the idea to convert the house into a romance book store. But in order to do this, she first must clear out the house, restore it to its original glory and convert it into a store. In order for her dream to come true, Maisy needs a restoration architect. Enter Ryder Copeland.

Ryder looks like a romance book hero come to life. If truth be told, he even has the hero baggage. Ryder is a single father to a fourteen-year-old girl named Perry. Ryder’s plan is to spend the summer restoring Maisy's house and then move Perry to an elite boarding school in Connecticut, while he takes a high-paying desk job in Charleston, South Carolina. Ryder feels he isn’t capable of love and has no desire to have a relationship. That is, of course, until Maisy enters his life. With the help of Maisy's best friend Savannah, Perry, and an abandoned kitten named King George, Maisy and Ryder become a family unit without realizing it.

I liked The Good Ones. The main and secondary characters were so easy to like. Perry was a refreshingly, good teenager. She's smart, thoughtful, and caring. She has a fierce stubbornness about her, and is wise beyond her years. There's King George who is actually based on Jenn's experience with rescuing an abandoned kitten. I'll admit, the King George storyline was my favorite part of the book. Savannah is a New Yorker who finds herself in North Carolina helping her friend. She's funny and opinionated. But she's also smart and has a heart of gold. She even meets her match in Ryder’s best friend Joaquin Solis.

I love that I didn't find The Good Ones to be predictable. You know the story will have a happily ever after, but I was definitely wondering how we were going to get there. For me, the biggest drawback of the story was Ryder’s hot and cold attitude with Maisy when little bumps in the road appeared. However, the ending of the story made up for that in spades.

I'm excited that there's another book in this series that is called Happily Ever After. Savannah and Joaquin definitely appear to have a love-hate relationship. That has fun written all over it. Plus, it’s a Christmas romance! I'm really hoping that we will also get more of Ryder, Maisy, Perry, and of course, King George.

When Jake took off his cowboy hat and pulled her close, Claire wrapped her arms around him and the two became one. When they kissed she knew they were making each other a promise for today, tomorrow, and forever. Clare sighed. For the first time in her life, she knew that no matter what happened this man, who was her partner and her best friend, would be by her side. For all time.


Maisy Kelly closed the book and pressed it to her chest and sighed. Jake Sinclair, the perfect man, why did he reside only in the pages of a book? It wasn’t fair. She was twenty-nine and none of the men she’d ever dated had been even remotely as caring or charming as Jake Sinclair.

Maisy blinked. Someone was at the door. No, no, no. She had a book hangover and she didn’t want to deal with the world right now.

They weren’t going away. Maisy rose from where she’d been seated on the bottom step of the stairs. In theory, she was supposed to be cleaning out her Great Aunt Eloise’s house, in reality she was binge reading Auntie El’s hoarder’s trove of romance novels. It wasn’t making the task, which was heartbreaking to begin with, any easier.

She strode to the door and yanked it open. Probably, if she had bothered to glance through the peep hole she would have been prepared, but she hadn’t and she wasn’t.

Standing on her front step, looking impossibly handsome and imposing, was a cowboy. Maisy glanced down at her book. On the cover was the artist’s rendering of Jake Sinclair, in jeans and a white shirt, leaning against a split rail fence, with a brown cowboy hat tipped carelessly over his brow. Maisy could practically hear the cows mooing in the background.

She glanced back up. Jeans, white shirt, and a cowboy hat. This guy had it all going on, except where the artist had left Jake’s face in shadow and not clearly defined, this guy was a full on 3D HD of hotness, with full lips, faint stubble on his chin, and quite possibly the bluest eyes Maisy had ever seen this side of the sky. She had a sudden urge to poke him with her pointer finger to see if he was real.

Miss? Huh, she hadn’t been called “Miss” since she’d started teaching at Fairdale University. Why would he…she glanced down.

She was wearing her favorite floral Converse All-stars, ripped up denim shorts, and her old Fairdale University sweatshirt, the one with the sleeves that hung down past her hands, oh, and she had on no makeup and her hair was held back by an enormous pink headband. She probably looked like one of her college students, possibly a freshman.

In that brief shining moment, she was certain if it was possible to die of embarrassment, she would expire in three…two…one. She gave it a second. Nope, still standing. Damn it.

“Listen, I’m sorry, sir, but whatever you’re selling, I’m not interested—,” she began but he cut her off.

“Oh, I’m not selling anything,” he said. He looked confused. “This is three-twenty-three Willow Lane, right?”

Maisy knew she didn’t have any appointments today. That was why she’d indulged herself in a good long reading sesh. This guy was probably a hustler, trying to con her to buy some property insurance or new windows. Ever since she’d inherited this monster of a house from Auntie El she’d had all sorts of scammers climbing out of the cracks in the sidewalk, trying to get her to refinance or buy a security system. It was exhausting.

The man met her squinty stare with one of his own. He shrinkled up one eye and mimicked her look of disbelief right down to the small lip curl. The nerve! Then she saw the twinkle in his one open eye, and Maisy couldn’t hold it. She burst out laughing.

He grinned at her and her ire diminished as she noted the cowboy had a sense of humor. Okay, she decided to give him a break and at least take his name and number.

“I’m sorry,” she said. “What was your appointment with Ms. Kelly about?”

“It’s about the house, actually,” he said. “My name’s Ryder Copeland. I’m a restoration architect, and you are?”

“Today is Tuesday,” he said.

“Sorry, it really is Tuesday. Wait,” he said. “Our appointment? You’re Maisy Kelly?”

The Happily Ever After Series: