An interview with Julia Buckley, author of A Writer's Apprentice Mystery series 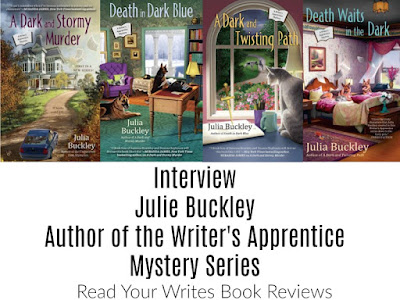 Lena London is fresh out of grad school, an aspiring writer with a giant student loan and a bad case of hero worship for Camilla Graham, a famous writer of Gothic Suspense novels. Through sheer serendipity, Lena earns an interview with her hero, and before she knows it, she has moved to the idyllic Blue Lake, Indiana, where Graham--to Lena's vast surprise--lives and works.

Lena finds herself moving into a dark and mysterious house, and it is almost as though she is a young heroine walking into the pages of a book similar to the ones she loves to read.

Lena is happily working on a new collaboration with her idol and bestselling suspense novelist and friend Camilla, but her joy is short-lived when a dark cloud descends upon the quaint town of Blue Lake, Indiana…

Hi Julia. It’s a pleasure to have you here. Welcome to Read Your Writes Book Reviews. How are you?
I’m fine, but cold. It was 8 degrees in Chicago this morning, and my old house is pretty drafty. Thanks for inviting me to the blog!

Are you kidding? I’m super excited that you’re here. I’m not even going to talk about the weather. It’s simply crazy. Today, we’re going to talk about your Writer’s Apprentice Mystery series. To date there are three books in this series, with the fourth, Death Waits in the Dark, coming out in April. I have to ask...what’s the deal with the word “dark” being in all the titles?
It’s part of the theme, so that is a necessary component for my publisher. Actually, here’s a secret: the first book was originally titled Murder at Graham House, but the publisher wanted a clearer link to the Gothic fiction that I so admire, so they changed it to A Dark and Stormy Murder. I think that was a good call. So yes, every title has the word “dark” to remind readers that this is a cozy, but it has Gothic elements. Some of those traditional elements include: A large castle or estate (in this case, that is just Camilla’s house), secret passageways, brooding or domineering men, overwrought (or sometimes soap-opera-like) emotion, heroic actions, and romance. Just to name a few.

A Writer’s Apprentice Mystery series is about Lena London who moves to Blue Lake, Indiana to write with her idol, mystery writer Camilla Graham. What can you tell readers about this series?
They are of course fictional, but the first novel was sort of a wish fulfilment story, as in “What if somehow I was in my twenties again and had the opportunity to live with my writing idol (who at that time and ever afterward was the great Mary Stewart)? And what sorts of mysteries might two mystery writers solve together? It was a fun thought exercise that turned into an enjoyable series for me.

In Book One, Lena London, who has just left grad school and is without a job, has recently ended a relationship, and has a mountain of debt, finds herself presented with an almost impossible coincidence: her best friend has moved to a little town in Indiana and found that Lena’s favorite author lives there, too, and is looking for a “ghost writer.” After that, one thing leads to another and Lena is offered an interview with the great Camilla Graham. That’s how she ends up traveling to Blue Lake in Book One.

Camilla is an older author, who has published countless books. Why do you think she felt the need to being Lena on board?

Camilla was initially looking for someone to be a little of everything: editor, continuity reader, perhaps occasional writer of passages. Camilla still has the ability to write on her own, but she wanted to be sure that she wasn’t losing pace. Once she met Lena and found out what a good fit she was as a sort of writing partner, Lena’s role increased.

A Writer’s Apprentice Mystery series has mysteries which are contained and solved in each book. But there is also a story arc which spans the series. Why did you choose to write the series this way?
That just evolved naturally. Much as Harry Potter doesn’t conquer Voldemort in Book One, so Lena and Camilla can’t solve every mystery in their first endeavor (although there is some resolution at the end of Book One). One storyline had to go on because there was just so much more to say about it—new characters, new plot lines. Part of maintaining a series is in fact trying to keep the readers coming back. Some readers were infuriated that the story had one cliffhanger strand. Most understood that this was a series staple.

As much as this series is about Lena, it’s also about Sam West. Tell me about him.
There’s not much I can say without giving spoilers, but Sam is the nearest geographical neighbor of Lena and Camilla, just a bit farther down the bluff. He once lived in New York, but has come to Blue Lake because of some unhappy complications in his life. The locals have not taken to him, and they gossip about him behind his back. Camilla seems to think that he is harmless, and Lena is confronted with this dichotomy of thought when she arrives in town.

This is one of my favorite series. Book three, A Dark and Twisting Path was engrossing (okay, all the books are). But this one had me jumping up and down, being excited and being blindsided. It was really a wonderful book. What’s your writing process like? I mean from the first book you had to have a step by step action plan. How do you do it?
Thank you! They say there are two kinds of writers: those who outline every detail in advance and those who begin a story and see where it leads them. I am the latter, although my publisher requires a thorough outline of each book. However, I tend to deviate from those outlines once I start writing. I have to follow my inclinations in the moment, and that has brought me some lovely discoveries—characters I didn’t know would even be in the books, plot lines that were not initially in the cards—so I’d have to say my process is not particularly organized, but it is creative, and I remain strict about writing on schedule.

I do have days, however, especially lately, that I am simply devoid of ideas. I am currently working on Book Five, and I have gone weeks and weeks without knowing what to write next. Because I have a couple days off and a looming deadline, I will make myself plow across this abyss and get something on paper. One can always revise later, but the idea is to get something down. Always keep writing.

My biggest challenge is that I have two full-time jobs. I teach high school English, and that involves bringing work home pretty consistently. So I have to find writing, editing and promoting moments somewhere in the cracks of my other schedule. It’s a challenge!

Thank you so much for all of your hard work. I’m excited to hear you’re currently working on the fifth book. How many books are planned for this series?
As of right now, the series will end with Book Five. If the sales are amazing, they might extend that, but as far as I know, these five are the extent of the series, and I’m thrilled to have been able to write this many!

What’s next for you?
As I referenced above, I’m still working on Writer’s Apprentice Book Five, and Book Four comes out in April.

I have a new series debuting this summer, called the Hungarian Tea House mysteries. The first book, Death in a Budapest Butterfly, comes out in July. I hope you’ll read it and see what you think!

I’m still teaching and working on some side writing projects in bits and pieces. I’m trying to read more this year, as well. I just read Alexander McCall Smith’s My Italian Bulldozer (a sweet little diversion) and a gripping suspense novel by Louisa Luna called Two Girls Down.

My husband and I tend to spend the evening getting lost in Netflix. If I didn’t watch so much tv I could get way more reading and writing done! And don’t get me started on my lack of exercise. That’s another New Year’s Resolution.

Thanks for reading, Kim!

Julia, thank you so much for taking the time to answer some questions for me.

Julia Buckley is a Chicago-area writer. Her first mystery, THE DARK BACKWARD, was published in 2006; since then she has published the Madeline Mann mysteries and the first in the Teddy Thurber series on Kindle.

She writes two series for Berkley Prime Crime, with debut titles THE BIG CHILI and A DARK AND STORMY MURDER

Buckley is a member of Sisters in Crime, Mystery Writers of America, and the Chicago Writers Association. She blogs about writing and mysteries at Mysterious Musings, where she has interviewed almost 200 other mystery writers about their work.

She teaches high school English and enjoys reading, playing Words With Friends on Facebook, and spending time with her husband and two sons, along with their menagerie of animals.