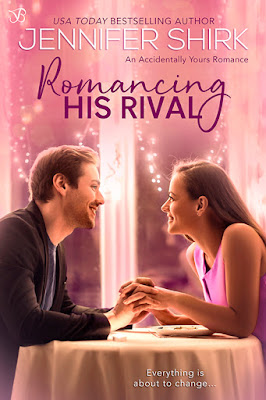 Everything is about to change...

Hopeless romantic Elena Mason doesn’t often hate people, but she hates her ex-fiancé’s insufferable best man, Lucas Albright III. She just knows Lucas is the one who talked her ex out of getting married—so Lucas is clearly the cause of all her problems.

And now she’s expected to work with him? Oh, heck no.

Lucas Albright wants nothing more than to make partner at his advertising firm, and he knows he works best alone. But then Elena ends up as his partner on an account that could win him a promotion. He had a great reason to end her engagement, not that she’d ever believe him. Still, he’s willing to try working as a team.

Elena knows she’s going to have to give in and work with her nemesis, though nobody said it had to be easy for him. But what happens when fighting starts feeling a whole lot like falling in love?

Romancing His Rival is the third and final book in Jennifer Shirk’s Accidentally Yours series. This is a truly sweet enemies to lovers story that will leave you smiling. They say you should never judge a book by its cover. In the case of Romancing His Rival, that statement is so true. The release cover screams Valentine read however, this is actually a Christmas romance. If you are a traditionalist and only read Christmas romances during the Christmas season, be sure to put this on your reading list.

Elena Mason is a hopeless romantic, who looks for signs to guide her life. Since her parents died, she's felt lost and alone. But for her that all changed when she met and started dating Scott Coban, a Wall Street guy from New York. Elena thought she found her perfect match. So what if he didn't spend as much time with her as she would like? So what if work kept him busy and interrupted the time they did spend together? He sent her flowers every Friday, just like her father used to do for her mother. He even proposed to her at the same location her father proposed to her mother. Everything was perfect until Scott's friend and best man Lucas Albright III broke them up. Elena views Lucas as the wrecker of dreams and happily-ever-afters.

Lucas has known Scott since they were roommates in college. If truth be told, he never spent that much time with Elena. But he understands why Elena isn't buddy-buddy with him. While he did question Scott about marrying Elena, he never said anything Elena is accusing him of saying. He was simply trying to save them both heartache, because in the back of his mind he knew they weren't right for each other.

Fate and a massive snowstorm converge to strand these two together for the night at Lucas's sister’s cabin. Over a dinner of smores, Elena is shocked to realize that Lucas isn't so bad after all. Lucas is shocked to discover Elena’s hidden talent as an artist. A sketch drawn by Elena proves to be the inspiration Lucas needs for the ad campaign he's been working on. When Lucas’s boss accidentally sees Elena’s drawing, he wants it. If Lucas can get Elena to work with him and provide more drawings, and if Lucas can wow the client, the partnership he’s been seeking could be his.

Romancing His Rival is a standalone read however, over the course of the two previous books readers have gotten a glimpse of Elena. They've also seen some of the things going on with Elena and Scott. Elena is a nice character. She's loving, caring, and giving. But what makes her unlikable at times is the fact that she's so hung up on Scott. She's so sure they belong together. But her blind desire won’t allow her see that Scott just isn't that into her.

When I found out who Elena's hero was going to be, I wasn't sure Jennifer could pull the story off. I mean how could a woman fall for the man who told her fiancé to break up with her? I went into the story already not liking Lucas. But oh my gosh! From the beginning, I had Lucas pegged all wrong. He was EVERYTHING Elena needed and more. Lucas wasn’t looking for love but he saw Elena. He listened to her. He accepted her for who she was. He was beyond supportive.

“Love just kind of sneaks up on you and won’t let go.” That is so true of Elena and Lucas. And honestly, that’s what makes Romancing His Rival so special. I loved that over the course of a month, Elena actually matured, discovered who she really was, and realized the error of her ways. The ending was heartfelt and touching. It showed exactly what makes love so special.

You can read an excerpt of Romancing His Rival here.

The Accidentally Yours Series:

Bargaining with the Boss ~ Review
Catch Him if You Can ~ Review

Jennifer Shirk is a USA Today bestselling and award-winning author of sweet (and sometimes even funny) romances for Montlake Romance and Entangled Publishing. Her novel, FIANCE BY FATE—a 2015 Readers' Crown Finalist—became an Amazon #1 best seller for Series Romance. And recently, Wrong Brother, Right Match, WON the Sweet Traditional category of the 2017 Golden Quill Contest and became a #1 Amazon bestseller for Holiday Romance.

She resides in a beach resort in NJ, so when she's not writing or working on her tan, she's taking care of her most treasured possessions: her husband, daughter and puppy (Sox).