Feature Spotlight & Giveaway ~ IN THE DOG HOUSE by Traci Hall 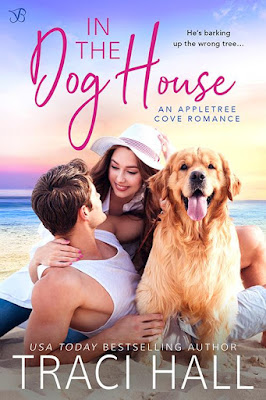 He’s barking up the wrong tree...

Ten years ago, Jackson Hardy joined the Marines, leaving behind a woman he still dreams about. When he's called home to care for his ten-year-old nephew, no one is more shocked than he to run into Emma again. Or to still have those same feelings. But Jackson isn't looking for love, and neither is Emma, especially not with him. His precocious nephew, though, and a retriever named Bandit, are about to change that.

So what if Emma Mercer is an overachiever? She has plans to get her doctorate in psychology and create a no-kill shelter for the EST dogs she trains. Which leaves absolutely no time for romance. She's fine with a furry family—dogs don't teach you to love and then rip your heart to shreds. But young Matty's situation tugs at her heartstrings and there's no way she can't help him…and Jackson.

She may have hotter-than-ever chemistry with the soldier, but forgetting the past isn't easy.

“I’ll tell you a secret,” he said in her ear. “You are the woman I dream about, when things are quiet and I’m looking up at the stars. It’s you, on our place at the beach, snuggled together under a blanket.”

Her heart cracked at his admission. “Why?” Why hadn’t he told her that before now?

He wouldn’t let her turn around to look at him as he finished his confession. “I knew that I’d hurt you that day, and I never forgave myself for it. I promised that I would be the best soldier I could be, to make the sacrifice worthwhile.”

It was a good thing that she was sitting down already, because his words took all strength from her body and left her speechless. Vulnerable.

Tears spilled over and splashed on his hand. “Em?”

His eagle tattoo flexed as he shifted and tightened his arm around her, but she hid her face. “Why didn’t you talk to me about this?”

He scooted backward and came around to face her, on his knees, sitting back on his heels. “It wouldn’t have changed anything, don’t you understand? But I never stopped loving you.”

He tilted his head so that their mouths were inches apart, his eyes staring deep into hers as if demanding that she see his feelings for her—and she did. It made her head swim, and she clasped his shoulder to steady herself. The shield around her heart buffeted in the storm of her emotions.

“I’ve never met anyone like you.” He feathered his lips across hers, and Emma sighed at the longed-for contact of his mouth. They kissed, and she didn’t care who watched in the crowd. She reveled in the rightness of it, ignoring the wrong.

“Just being here with you eases something in me.” He tucked her close.

As if by silent agreement they watched the world from their blanket, content to be together for this moment with no expectations.

As the sunset faded to dusk and then into night, the white caps of the Cascades glowed in the moonlight. By nine, the music stopped, and the fireworks were set to begin. Jackson made sure they sat hip to hip. Her body hummed at the heat of his thigh next to hers, the touch of his pinky finger skimming her hand.

Fireworks sparked before them, and she jumped back, her hand to her throat as she laughed nervously. Bandit and Matthew raced over to the blanket, Bandit dropping the slobbery Frisbee in her lap.

Jackson met her gaze, a smile dancing along that sexy mouth, his eyes promising a million pleasures—later.

Later. Emma grinned and hugged Bandit close. She didn’t know what the future might bring, and even if it wasn’t a happy outlook, she couldn’t turn her back on what she felt right now. One day at a time. 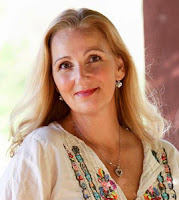 With an impressive bibliography in an array of genres, USA Today bestselling author Traci Hall has garnered a notable fan base. She pens stories guaranteed to touch the heart while transporting the reader to another time and place. Her belief in happily ever after shines through, whether it's a romantic glimpse into history or a love affair for today.