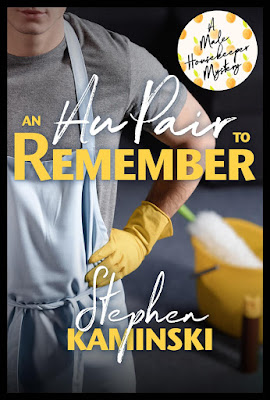 To his mind, Cam Reddick has failed—as a husband, as a father, and as a professional. After recognizing that his vanilla credentials didn’t stack up in a big city brimming with overachievers and toiling in drudgery for half of a decade, an emotionally raw Cam returns to his childhood hometown—the quaint and quirky village of Rusted Bonnet, Michigan. He’s determined to resuscitate relationships marred by youthful immaturity, most importantly those with his ex-wife Kacey Gingerfield (who doubles as the village’s Deputy Chief of Police) and their first grader, Emma. Armed with striking looks and an endearing proclivity for mixing metaphors, but saddled by “momma’s boy” tendencies, Cam takes the helm of his mother’s housekeeping business—Peachy Kleen. Access to homes across the village facilitates Cam’s penchant for amateur sleuthing as Kacey’s aide-de-camp. Surrounded by Kacey, his sophisticated mother Darby, garrulous senior housekeeper Samantha, and recuse fish cum confidant Bait, Cam’s circuitous journeys to solving murders and unravelling complex cons hasten his struggle down the path of self-healing to self-respect. And there’s hope that—just maybe—he can rekindle the romance he once had with Kacey.

In An Au Pair to Remember, Cam’s plan for a quiet return to Rusted Bonnet is dashed when a beautiful German au pair, Greta Astor, is found dead in Dutch McRae’s foyer with all signs pointing to a hastily disassembled trip wire at the top of the stairs. When Kacey learns that Cam was cleaning the McRae home the previous afternoon, she confides to him that Chief Bernie Leftwich is set on arresting Dutch for the murder—either alone or in tandem with Greta’s bartender boyfriend. But she worries that Bernie’s been duped. And later, when his mother Darby becomes a suspect, Cam inserts himself into the investigation and stumbles through a series of ostensible incongruities—a thief swallowing a cache of stolen diamonds, a snack food distributor laundering money, and a Cash-for-Gold scam. Meanwhile, Peachy Kleen’s young African housekeeper has disappeared with one of the company vans. All the while, Cam finds himself flirting with his new neighbor and struggling with his complicated feelings for Kacey.

Hi Cam. Welcome to Read Your Writes Book Reviews. How are you?

Okay. Not the answer I was expecting. We’re going to play a game. Let’s call it the get to know Cam Reddick game. I’m going to ask you a series of questions. Some may be a little off the wall, but that’s okay. You may or may not have fun, but readers and myself will enjoy finding out about you. Shall we begin?
Sure—I’ll do my best.

I'm sure you'll do just fine. Tell us about yourself. Who are you? How old are you?
Cameron Reddick. Cam for short. I was born and raised in the village of Rusted Bonnett, Michigan, moved to the east coast for a few years, and am finally back home. I took over my mother’s housekeeping business, Peachy Kleen and am getting to know my six year-old daughter, Emma. I’ve finally manned up and taken responsibility for some pretty bad decisions I made. I’m thirty-two.

Do you have any weakness or bad habits?
Tons! But my two most obvious are mixing metaphors. I get it from my late father—guess I’m a chip off the old block and tackle. And some might say I have a bit too much attachment to my mother, Darby.

Tell us about a defining moment in your life.
The most defining moment of my life was solving a murder! In An Au Pair to Remember, a German au pair was killed in a house I regularly clean. Let me tell you, this was one convoluted mess to figure out. Kacey Gingerfield, my ex-wife, is the deputy chief in Rusted Bonnet; helping her solve this murder has brought us closer together than ever.

What’s your favorite beverage? Favorite food?
I’m saddled with celiac disease, so my options are limited. And yes, it’s the real deal, not a gluten free diet. Black coffee is my favorite drink and hamburgers are my favorite food, just on lettuce wraps instead of buns. And on the rare occasion where I try to tolerate gluten my guilty pleasure is a box of glazed “Timbits” (doughnut holes) from Tim Hortons.

Do you have a favorite item of clothing?
Probably the checked button-downs from Vineyard Vines that I wear untucked.

What’s your most prized possession?
I wouldn’t call him a possession per se, but my rescue fish, Bait, is the best listener around.

What do you drive?
I drive a Chevy Malibu—that certainly didn’t fit in at the Southport Golf and Tennis Club, trying to find the mysterious T.L. Crutchfield when investigating. I also have three vans we use at Peachy Kleen—Georgia, Virginia, and Montana.

Is there anything in your past you’d like to forget?
A lot. Newly married at twenty-four, I hadn’t been ready to start a family. But Kacey was determined to begin right away. We should’ve addressed the matter head-on before the wedding—even before getting engaged—but communication hadn’t been one of my strong suits. So I distanced himself from Kacey—mentally and physically. I reconnected with a group of single friends who partied hard. Graduation from college led to jobs and money, which we parlayed into trips to Las Vegas and New Orleans. And late night after late night filled with heavy drinking. The toll of my absences, morning hangovers, and terse responses to Kacey’s conciliatory overtures added up quickly.

Fifteen months into our marriage, Kacey announced that she was pregnant. She begged me to settle down, to act like a mature adult. But the news infuriated me. A dearth of sleep and lack of focus led to a series of poor performance reviews at work. Shortly after Emma was born, recession clobbered the state and I was shown the door. On top of everything else, I couldn’t handle having a baby in the house, especially one saddled with colic. Rather than console my daughter, I ignored her, and then I moved out and away. I’m disappointed with myself and ashamed.

What are the last three purchases you’ve made with your debit or credit card?
A “No Fishing” sign for Bait’s tank, a bean bag designed to look like an overstuffed kitten for Emma, and ammonia—it does wonders for cleaning blood from carpet, which I had to do after Greta Astor died falling down the McRaes’ staircase.

If we saw you at the grocery store, what items would you have in your cart?
Coupons! But also, a lot of produce—berries, plums, peaches, mangoes, tomatoes, corn, and honest-to-goodness, love me some celery as long I can dip it in a bath of Frank’s Ret Hot sauce and blue cheese dressing. Plus plenty of Annie’s Shells and White Cheddar for Emma.

Do you run from or embrace conflict?
Hmm, good question. I want to think that I’m coming around to embracing it. For a long time I ran, but no longer. I stood up in some pretty tough situations when investigating the murder—a Russian money launderer and a couple of his goons, a Cuban who looked meaner than a junkyard dog barking up the wrong tree, and the killer himself (or was it herself?).

Who are the most important people in your life?
My mother and daughter without question. My mother has always been here for me and even turned over the reins to Peachy Kleen to me. And Emma is the sweetest thing. Kacey, my ex, has become important in my life again. And then there’s Samantha, my most senior housekeeper at Peachy Kleen—she as surely and opinionated as they come, but fiercely loyal.

Thanks for spending some time with us, Cam. Anything you want to add?
Just a big thank you for having me!

Cam, you are very welcome.  It was a pleasure getting to know you better.


Purchase An Au Pair to Remember from:
Amazon | Paperback | Goodreads 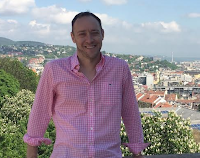 Stephen Kaminski is the author of An Au Pair to Remember, the first installment of the Male Housekeeper Mystery series. He also writes the award-winning Damon Lassard Dabbling Detective books. Stephen is a graduate of Johns Hopkins University and Harvard Law School and serves as the Chief Executive Officer of the trade association representing the United States’ poison control system and its fifty-five centers. He lives with his daughter and rescue kitty in the Washington, DC area.

You can follow the An Au Pair to Remember Blog Tour here.