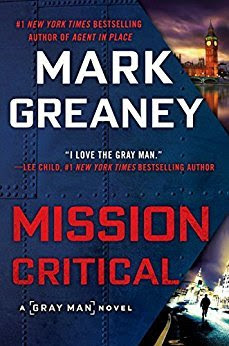 Court Gentry's flight on a CIA transport plane is interrupted when a security team brings a hooded man aboard. They want to kick Gentry off the flight but are overruled by CIA headquarters. The mystery man is being transported to England where a joint CIA/MI6 team will interrogate him about a mole in Langley.

When they land in an isolated airbase in the U.K., they are attacked by a hostile force who kidnaps the prisoner. Only Gentry escapes. His handlers send him after the attackers, but what can one operative do against a trained team of assassins? A lot, when that operative is the Gray Man.

Mission Critical is the latest book in the The Gray Man series by Mark Greaney. As with all of the other books that I have read in this series, it did not disappoint. The Gray Man series is everything a master spy novel is supposed to be and then some. The action is intense and the suspense keeps you on the edge of your seat throughout. This time, there is a bit of romance that shows an entirely different side of The Gray Man aka Court Gentry, that I am glad we finally have an opportunity to explore.

Two books ago, Courtland Gentry came across a Russian Spy named Zoya Zakarov during an Op. He brought her to the U.S. where his CIA handlers planned on making her an asset. They had some chemistry, but didn’t really have time to explore it as Court moved on to the next mission. Present day, Court is a passenger on a CIA plane in Europe when all hell breaks loose. He ends up trying to retrieve someone that was literally taken while they were making an exchange at an airport. To make things more interesting, this wasn’t even his Op. He was just hitching a ride back to the U.S. to get briefed on his next Op. Luckily, when you are The Gray Man, improvisation is all in a day’s work. To make for a larger twist, Court’s current predicament intersects with Zoya in a way that no one will see coming. It’s a Spy Thriller so I can’t give much more than that. I’ll just say that you have to pay attention to every detail to truly understand what’s happening. Plus, we get to see Court and Zoya work together along with Romantic, another spy from Court’s past. Romantic is a cocky Texas cowboy who likes what he does a little too much.

The best part of Mission Critical is the budding romance between Court and Zoya. Court has been doing this spy thing for a while and it appears that Zoya has made him question the future in a way that he hasn’t before. Not to mention the fact that Court encounters a giant of a man that kicks his butt on more than one occasion. Inevitably, you have to ask if Court is going to hang it all up for love or will he die doing what he does best. I went through the entire book trying to figure that one out and so will you.

You can read an excerpt of Mission Critical here.

Mark Greaney has a degree in international relations and political science. In his research for the Gray Man novels, including Agent in Place, Gunmetal Gray, Back Blast, Dead Eye, Ballistic, On Target, and The Gray Man, he has traveled to more than fifteen countries and trained alongside military and law enforcement in the use of firearms, battlefield medicine, and close-range combative tactics. He is also the author of the New York Times bestsellers Tom Clancy Support and Defend, Tom Clancy Full Force and Effect, Tom Clancy Commander in Chief, and Tom Clancy True Faith and Allegiance. With Tom Clancy, he co-authored Locked On, Threat Vector, and Command Authority.