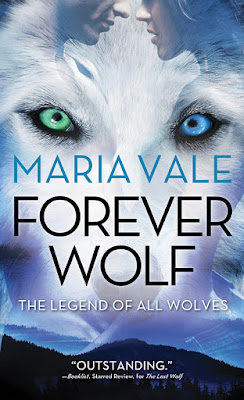 Born with one blue eye and one green, Eyulf was abandoned as an infant and has never understood why, or what he is...Varya is fiercely loyal to the Great North Pack, which took her in when she was a teenager. While out on patrol, Varya finds Eyulf wounded and starving and saves his life, at great risk to her own.

Legend says his eyes portend the end of the world...or perhaps, the beginning...

With old and new enemies threatening the Great North, Varya knows as soon as she sees his eyes that she must keep Eyulf hidden away from the superstitious wolves who would doom them both. Until the day they must fight to the death for the Pack's survival, side by side and heart to heart...

Forever Wolf is the third and final book in Maria Vale’s Legend of All Wolves series. Although I didn’t like how it ended, it was a very good book. The series was wrapped up in a nice bow. There was a lot of additional information learned in Forever Wolf that added to the overall lore of these wolves that humans would refer to as werewolves.

As with the first two books, the main theme of Forever Wolf is the unlikely coupling of a pack member and an outsider. And to be clear, if you haven’t read the other books in this series, it would be very difficult to really follow along. This is truly a continuation that starts in the first book, The Last Wolf. The main character of Forever Wolf is Varya, one of the protectors of the pack. She is committed to the pack more than anyone. She is very much caught up in the old ways of the pack until she meets Eyulf. Eyulf has no clue what he is or how he came to be. Just like Varya, Eyulf was cast aside. He is alone and has a profound affect on Varya. Unfortunately, the threat from the Shifters that has existed since the first book has escalated into something the pack can no longer avoid and gets in the way of their relationship. In addition, the pack has become fractured because of choices that some of the pack members have made that go against tradition.

There are lots of lessons to be learned from Forever Wolf. It was all about family, tradition, and perspective. Although tradition can be important, you have to be sure to have perspective and understand the reasons why certain laws are created. Some of the pack was so entrenched in tradition, that they failed to recognize the purpose of those traditions which was for the good of the pack. Due to all of this conflict, they fail to see the threat that’s right in front of them. Although Varya seems to be the most cold and feared member of the pack, she ends up being the hero that they never expected. I really admired her devotion to the pack but wished that things could have gone a little differently for her in the end. That’s my only issue. Everything else was great.

You can read an excerpt of Forever Wolf here.