Review ~ THE RANCHER TAKES A FAMILY by Paula Altenburg 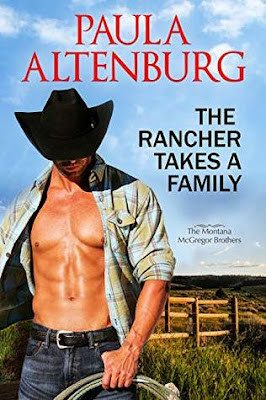 Rugged rancher Jake McGregor wrangles cattle better than kids, but when he's suddenly saddled with three grieving children, he's determined to step up. His sister's kids shouldn't pay for her error in judgment in naming him guardian. Problem is, he doesn't have a clue what he's doing. And the woman who attempts to help with his every fumble is the one woman he wants to steer clear of...

Lacey Anderson loves a challenge, but Jake's already broken her heart once. When his tall shadow darkens the doorway of her classroom, she's ready to shut him out - until she meets her new students, and sees the desperation in Jake's eyes. Emotional intelligence is so not his forte. But she's done banging her head against that wall.

Jake, however, is finally ready to learn how to love and Lacey’s the teacher he wants. Is she willing to risk her own heart again to teach him?

I cannot begin to express how much I loved Paula Altenburg’s The Rancher Takes a Family. This is truly a second chance romance full of heart.

Jake McGregor finds himself the guardian of his two nephews and niece; ten-year-old Mac, five-year-old Finn and infant Lydia, after his sister, brother-in-law, and parents are killed in a plane crash. To say everyone is grieving would be an understatement. For the kids, the situation is worse because they are moved away from everything they know in New York City to Grand, Montana. Jake isn’t sure why his sister Elizabeth selected him to be their guardian. It’s not like he has any experience with kids. But luckily for him, his two younger brothers Luke and Zack agree to move back to Montana to help out for awhile.

Lacey Anderson is an elementary school teacher. She’s also Jake’s ex-high school girlfriend and the woman who broke his heart. When Lacey sees Jake and the boys struggling across the playground, she can’t resist trying to help out. What starts out as a little help and encouragement blossoms into more when Jake and Lacey realize they still are attracted to and have feelings for each other.

Paula Altenburg has written amazing characters. Luke and Zack put their lives on hold to move back to Montana and help out. You get a glimpse into the men they are. You also get introduced to their future heroines. Mac and Finn will break your heart. You see them struggling with their new reality, but also see them adjust. I don't think Paula has ever written a New Adult book, but I have already begged her to write a story for Mac.

The Rancher Takes a Family was deeper than I expected. It’s filled with so much love for family. If this story doesn’t make you cry, it will definitely tug at your heartstrings. I'm looking forward to seeing what Paula has in store for the next Montana McGregor Brothers book.

You can view Jake’s Hero Profile and read an excerpt of The Rancher Takes a Family here.