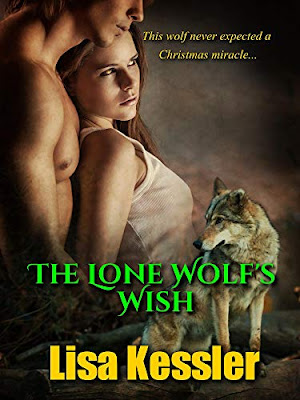 Shane Dodd has lost everything, his Pack, his home, and hope. His only wish this Christmas is to live long enough to exact revenge on the Nero assassin he believes killed his Pack. But when he steps between a bullet and Piper Holland everything changes. The woman dressed as one of Santa's elves is his mate, and she ignites a flame in his heart. But hope and love are dangerous wishes for a lone wolf.

Lisa Kessler is my go-to fantasy/paranormal author. If I’m in a reading funk, she immediately gets me out of it.

Shane Dodd is the last wolf of his pack. He has tracked a jaguar shifter responsible for killing his pack from Kentucky to Arizona. As he's watching the shifter, he realizes another jaguar assassin is nearby and ready to strike. When a shot rings out, Shane's wolf leaps up to protect Piper Holland. Ten years ago, Piper and Shane were high school sweethearts. But one day in the middle of the night, Piper and her father left town. There were no good-byes. No explanations as to why they were leaving. No way for Shane and Piper to speak to or see each other again.

Now Shane and Piper are back together and they will soon discover the young love they once had still burns hot as adults. They will also learn secrets they never knew about each other. The Lone Wolf’s Wish is a standalone read with a complete ending for Piper and Shane’s story. However, there is an arc that will play out over the course of the upcoming books. This series promises to be full of surprises and will threaten the lives of all the members of the Sedona Wolf Pack.

The Lone Wolf’s Wish is a good start to this new series. It's full of wonderful characters and is a great escape from the real world around us. I'm looking forward to the next book in the series.

Discover where it all began with the Moon Series: