An interview with Libby Klein, author of The Poppy McAllister Mystery series 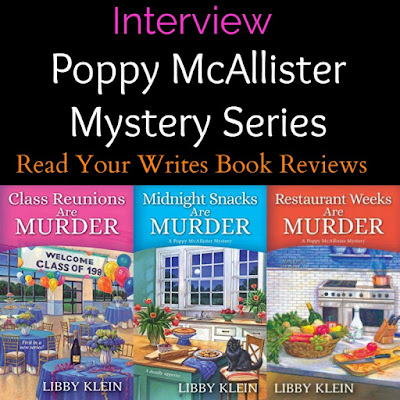 Newly widowed and stuck in a middle-aged funk, Poppy has been running on cookies, infomercials, and one-sided chats with her cat for months. There’s no way on earth she’s attending her twenty-five-year class reunion. Using the dreaded homecoming as an excuse to visit her eccentric Aunt Ginny, Poppy vows to leave Cape May with pride and Spanx intact.

When her sleepwalking aunt is accused of committing murder, Poppy McAllister finds out there's no rest for the weary...Cape May, New Jersey, is the site of a big culinary competition—and the knives are out...The last thing gluten-free baker Polly McAllister needs in her life is more drama—or more murder...

Hi Libby. Welcome to Read Your Writes Book Reviews. How are you?
I am so excited to be here with you today, thank you.

I’m glad you could be here. The Poppy McAllister Mystery series is new to me. What can you tell me and readers about the series, and are the books standalone reads?

Poppy is a middle-aged, plus-sized widow in a funk. She’s been self-medicating with her friends Marie Callender and Ben and Jerry when she gets coerced into returning to Cape May, NJ to attend her twenty-fifth high school reunion. Her best friend, Sawyer, needs help facing the cheerleaders who made them miserable all through high school, plus they’re 30 years in on a pinky swear so Poppy can hardly say no. The night is one disaster after another, and one of the bullies ends up dead in front of Poppy’s old locker, then the other bully arrests her for the crime. Poppy just wants to escape beach hell and return home to her Oreos and the Food Network.

Each of my books has a stand-alone mystery, but there is a lot going on in the other storylines. The Poppy McAllister Mysteries is part culinary cozy, part romance, part chick-lit and very funny. I think they’re more enjoyable when read in order.

What can you tell me about the main/secondary characters, who readers will come to love or hate in the series.
Aunt Ginny raised Poppy. She’s a feisty 80-something with green eyes, Lucille Ball red hair, and a love for extreme sports. She may be certifiably crazy – the jury is still out. Poppy is half her age, but she only has a quarter of her energy. Most of Poppy’s time is spent trying to keep Aunt Ginny out of trouble.

Sir Figaro Newton is a mischievous black smoke Persian who is too smart for his own good. He stays by Poppy’s side to support her unless someone is eating bacon, opens a can of tuna, or has the bag of cat treats. Figaro always seems to know more than he lets on.

Sawyer Montgomery has been Poppy’s best friend since grade school. Sawyer is beautiful with chestnut hair and green eyes. Her heart is as big as the moon. She’s as loyal a friend you could ever hope for.

Georgina is Poppy’s former mother-in-law. Often seen decked out in the Jackie Onassis Chanel skirt suit, she grew up privileged and married money. Georgina has high expectations for Poppy and she demands her version of excellence, whether Poppy wants her involvement or not.

Itty Bitty Smitty just may be the world’s worst handyman. At 5 foot 2, he’s a little man with a perfectly round bald head and deep-set cow eyes. He’s been renovating Aunt Ginny’s grand Victorian into the Butterfly Wings Bed and Breakfast. A job that might never get finished.

How did you go about creating your characters? Did you have any inspirations?
Everyone is some form of fiction wrapped around a seed of familiar. Aunt Ginny is based on my grandmother who would get as big a kick out of the character’s antics as I do. Itty Bitty Smitty is based on my father, and Figaro is my real-life cat who is just as naughty as his fictional counterpart.

I hear there’s a romance. I love romances in cozy mysteries. What more can you tell me about Poppy’s love interest, provided it isn’t spoiler information.
Poppy comes home to Cape May with one goal, not to run into Tim, her high school sweetheart. No one wants the one who got away to see them fat, frumpy and forty. Her goal is thwarted in the worst way possible; it’s the nightmare reconnection. Poppy still feels the familiar spark, but she may be the only one.

Poppy has also had a long-time love affair with coffee. It’s the first thing she thinks about in the morning and the last thing she dreams about as she goes to sleep. The one saving grace she finds while stuck in Cape May is a beautiful Italian coffee shop. But it’s Giampaolo, the gorgeous Italian barista who set flight to a herd of butterflies in her stomach, and leaves her stumbling over her words.

Each book in the series contains recipes at the end of the book. How do you come up with the recipes?
Poppy is diagnosed with an auto-immune disease and has to go on the gluten free Paleo diet. There are seven recipes in each book, all part of her new lifestyle. Many of the recipes I’ve made up from scratch, a couple I’ve altered from other sources to convert them to Paleo and put my little spin on them.

The latest book in the series is Restaurant Weeks Are Murder. What can you tell me about it?
Restaurant Weeks is the third book in the series, and one of Poppy’s lifelong dreams comes true. She is working in a professional kitchen alongside fellow chef - high school sweetheart, Tim Maxwell. They are teammates in the first annual mystery basket “Chopped” style Restaurant Week Competition. If only Tim’s perky little blonde friend, Gigi, weren’t also on their team.

What would Poppy say about you as her author?
Poppy would like to have a vacation. She has a lot of books she’d like to read and a lot of TV she’d like to catch up on. She’s exhausted. Her entire life has flipped upside down since I sent her home to Cape May. Aunt Ginny alone is a full-time job worth hazard pay. Then there’s the crew that Aunt Ginny hangs out with – the Biddies. It may be more than one person can handle. Poppy loves the supporting cast, but her heart is in turmoil over the men in her life. She isn’t even a little bit interested in solving murders, but there’s this thing with a Psychic and a curse that may or may not be real – she isn’t a fan of that at all.

Libby, thank you so much for taking the time to introduce me and readers to your Poppy McAllister Mystery series.
Thank you so much for hosting me. It’s been a pleasure hanging out with you and your readers. I hope you all fall in love with Poppy and the hilarious chaos of her life.

Libby Klein graduated Lower Cape May Regional High School sometime in the '80s. Her classes revolved mostly around the culinary sciences and theater, with the occasional nap in Chemistry. A few years ago, she was diagnosed with an autoimmune disease that forced her to remove gluten from her kitchen and adopt a Paleo Diet. Now her life revolves around coffee and bacon. When she’s not feeling sorry for herself that she can’t eat bread, she writes from her Northern Virginia office while trying to keep her cat Figaro off her keyboard. Most of her hobbies revolve around eating, and travel, and eating while travelling.