Review ~ SOMETHING TO PROVE by Shannyn Schroeder 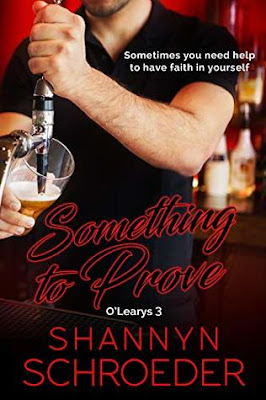 Determined to show her father she's capable of running the family business, Elizabeth Brannigan sets out to save his struggling Chicago bar. But she'll need a little help dealing with the rough crowd. When she encounters the handsome co-owner of a thriving Irish pub, she's more than ready to take on those late night shenanigans.

Colin O’Leary’s father passed away before he could prove to him that he wasn’t a screw-up. Now he wants to show his brother he’s responsible enough to own a bar of his own. And Elizabeth just might be the saving grace he's always needed. Can they mix a little business and pleasure or will the merger destroy everything?

Elizabeth Brannigan and Colin O’Leary definitely having something to prove to themselves and to their families. Elizabeth is the youngest of two kids and works for her father’s company. Since she was in college, her father has pitted her and her older brother Keith against each other. Or so it seems. With her father getting close to retiring, Elizabeth wants to become the CEO of the company.

After the death of his father, Colin O’Leary was lost. He didn’t think he could be the head of his close knit Irish-Catholic family, so he bolted, leaving his brother Ryan to handle the family and the family’s bar business alone. Colin returned to Chicago about a year ago and has been desperately trying to prove to his family, especially his younger brother Ryan that he’s done running away and is there to stay. Colin has been biding his time. He wants to prove that he can handle his own bar, but he doesn’t have enough money to purchase one and Ryan isn’t in a trusting or giving mood.

Upon discovering a ran down bar that’s bleeding red in her father’s list of possessions, Elizabeth decides to turn the bar around as a way to prove her worth to her father and brother. Elizabeth eventually enlists the help of Colin and together they complete each other in the bar and personally.

While I was disappointed that there wasn’t more to Colin’s story of running away, I still loved this story. Something to Prove is the story of two people discovering their own worth and path in life. Realizing that you have to trust yourself and those around you. Understanding that when all is said and done, your family has your back. And that maybe when it all comes down to it, the only person you have to prove something to is yourself.


Purchase Something to Prove from:
Amazon | Barnes & Noble | Kobo | Goodreads

More Than This ~ Review