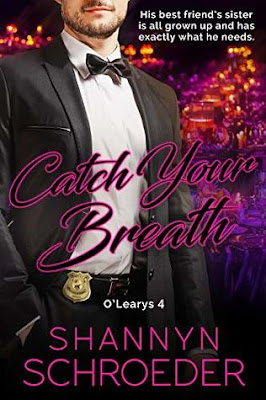 As kids they steered clear of one another. That was then—this is now.

As a dedicated reporter, Moira O’Leary has access to Chicago’s swankiest affairs. With her confidence and style, she blends right in with the elite crowd. But when her childhood crush starts popping up at posh events, she struggles to keep her cool. After all, he’s always ignited something in her.

Undercover cop Jimmy O’Malley has always tried to avoid his best friend’s little sister. Something about Moira spelled trouble. But watching her navigate Chicago’s most elaborate galas with ease, Jimmy knows he needs her help to crack a case. Just as their chemistry ignites, Moira gets dangerously close to his investigation. Now, it’s up to Jimmy to keep her safe. Can childhood crushes lead to breathless desire?

Moira O’Leary is the oldest girl and fifth of six children. She has watched her brothers fall in love within the last year or so. She’s starting to realize that that is something she wants for herself. Moira is a reporter who for the most part only writes articles about charity events and parties within the Chicago area. Moira has a passion for journalism, but no one in her family takes her or her job seriously.

Jimmy O’Malley is the oldest of the five O’Malley children. He’s a former soldier who moved back home to take care of his father. Jimmy has worked his way up in the Chicago PD and was recently promoted to detective. Being an unknown puts Jimmy in a good position when the mayor needs someone to go undercover.

Moira and Jimmy have known each other almost their whole lives. Moira, in fact, has had a crush on Jimmy most of her life. For Jimmy, it’s just a struggle to remember that Moira is his friend’s little sister and that he needs to stay away from her. Jimmy’s undercover job and Moira’s job put them on a collision course to end up working together. Moira’s easy going charm and reckless behavior puts Jimmy on edge. With her consistent pushing, the two finally give into their feelings.

The back and forth between these two can be a little irritating, but I completely see why these two work. Since he was a child, Jimmy has had the need to protect and doesn’t really allow himself to relax and have fun. With Moira, Jimmy’s protective instincts have to be on high alert but she also has the ability to get him to relax and have fun. Moira loves her job but puts herself and it down because her family and other people do. Jimmy is able to see how good a writer she is and sees her like no one else does.

Moira is a one woman wrecking crew who blows into Jimmy’s life and gives him everything he’s ever wanted but was afraid to hope for.

More Than This ~ Review
Something to Prove ~ Review