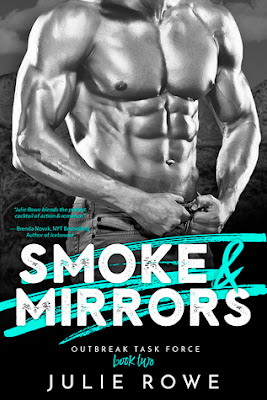 Someone scratched a death threat in the paint of CDC nurse Kini Kerek’s rental car. She’s in Utah researching Hantavirus, but damaging rumors about the CDC have left residents suspicious and uncooperative. Thank goodness for hot, sexy, former soldier Smoke, a man of few words, who’s assigned to protect and help her navigate the isolated desert town as she races to identify a deadly virus before more people die.

Memories from the combat zone leave ex-Special Forces soldier Lyle Smoke in a constant state of battle readiness, and he finds no solace, even after returning home to Small Blind. When he meets Kini Kerek, he discovers his heart isn’t entirely dead. But, that might not last long, because this outbreak is no mistake, and he’ll need to use all his survival skills gleaned from the military and his Native American upbringing to keep him and the beautiful, but secretive, Kini alive.

Lyle Smoke has just been discharged from the Army after serving 8 years. He returns to his hometown of Small Blind, Utah with a whole lot of baggage. The sad part is that not all of that baggage comes from his time in the Middle East. While serving, his son and the mother of his son were killed in an auto accident. Lyle blames himself because he feels like he let his son down. Outside of that, Lyle is quiet but deadly. He shows up at his parents’ house unannounced, goes to bed, and wakes up with a woman laying on top of him. Her name is Kini Kerek and she is a nurse for the CDC doing a survey in town regarding the Hantavirus. His parents had offered up his room while she was in town and he didn’t know about it. Coincidentally, Lyle had received a call from his former Army buddy offering him a job with the CDC handling protection for an investigation team. Lyle’s need to protect and an attraction to Kini makes it easy for him to accept the job and immediately start working with Kini to keep her safe.

Kini had been encountering a lot of unexpected animosity from the townspeople. This is mainly because people have been getting sick right around the same time she shows up asking them to provide blood samples for the CDC survey. This illness ends up being an outbreak with origins leading some to think that it may be terrorist related. As Lyle and Kini investigate, it becomes apparent that there is something sinister going on. There is a lot of action involved and Lyle’s superb training is very much showcased as he does whatever it takes to keep Kini safe while they fall for each other. Kini has her own baggage when it comes to military men so she has to reconcile those feelings with her attraction to Lyle. In addition, Kini is no weak woman so she gives Lyle a run for his money as he tries to play the white knight.

Smoke & Mirrors seems to be much more sexually charged than Viable Threat. Lyle and Kini really turn the heat up in the bedroom. They are truly meant to be together in every way. There is also some great messages about family as Lyle’s father and grandfather also take part in the action when the stakes get much higher than anticipated. All in all, I really enjoyed Smoke & Mirrors. It was very well balanced and draws you in from the beginning. I am looking forward to reading Sleight of Hand, the next book in the series.