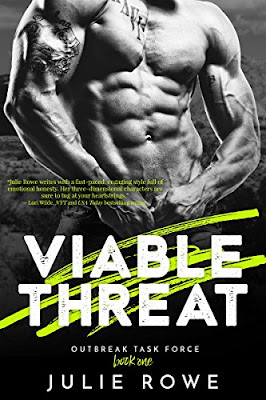 Special Forces soldier and medic Walter River would give anything to snatch more than a few seconds of down time to see if he can rattle the no-nonsense and incredibly hot Dr. Lloyd he's protecting, but dodging explosions, snipers, and student radicals who've unleashed a lethal bio-engineered microorganism have made that almost impossible. Maybe he'll get a chance—if he can figure out how to keep them both alive. CDC microbiologist Ava Lloyd races to find a cure for a bio-terrorism organism sweeping El Paso. The few stolen moments with her very hunky bodyguard River have been explosive, but no matter how alluring he is, she can't afford to get distracted. The clock is ticking, people are dying by the hundreds, and once this crisis is solved, they'll both be off on their next assignment, thousands of miles apart.

Viable Threat is the first book in Julie Rowe’s Outbreak Task Force series.  The story has to do with a bioterrorist plot that unfolds rapidly in El Paso, Texas.  Everything occurs at breakneck speed and it’s a perfect glimpse of what could happen considering the world we live in now.  Special Forces Medic Walter River and Microbiologist Ava Lloyd literally meet, disarm a terrorist, and then get blown up.  And that’s literally how the entire book plays out.

Rarely do I find a book that is both serious and funny at the same time.  River may be a soldier that has dealt with many perilous situations but he makes it a point to keep things light by making jokes and being brutally honest.  On the other hand, Dr. Lloyd isn’t a fan of soldiers because she was engaged to one who was killed in action.  Together, they become a dynamic duo trying to prevent the spread of a deadly virus that seems to have been created locally in El Paso.  The action is intense as well as the attraction between River and Ava. There are a lot of law enforcement agencies involved in the chaos which has all of them jockeying for control of the investigation when they should be more concerned with eliminating the threat.  In the midst of all of that, River comes across as a superhero.  He is fearless and determined to keep Ava safe at any cost.  Ava is a brave and strong woman. Although she is a lab rat, she handles herself very well in the field.  You can’t help but root for her and River.  Be advised that there is a retired Drill Sergeant that steals the show close to the end of the book.

Of course, there is a mystery element involved in Viable Threat that adds another dimension to the book.  It’s these layers that make the book hard to put down.  There’s romance, action, sex, mystery, and a heavy dose of reality so what else is there to ask for.  I will gladly read the next book in this series.