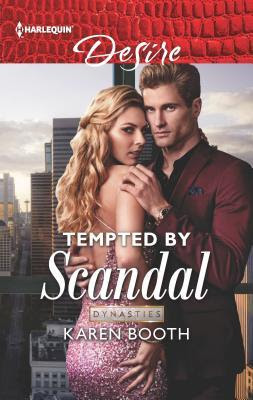 As her billionaire boss, he had everything.

Nadia Gonzalez has too much at stake to fall for her boss. But billionaire entrepreneur Matt Richmond has a way of getting past her defenses. Too bad what's amazing in the bedroom is bad for Richmond Industries--especially when tabloid rumors threaten to destroy Nadia's career. Can she trust Matt to stand by her...or must business come first?

Going into reading Tempted by Scandal, I knew it was the first book in the Dynasties: Secrets of the A-List series. I knew the series consisted of four books, written by four different authors. I knew each book would have an HFN or an HEA. And I knew there was a mystery arc which carried over all four books.

What I didn't know or expect was to have so many characters thrown at me. Almost every hero or heroine from the series makes an appearance in this story. I definitely didn't expect to find myself in the middle of a nighttime soap opera. Tempted by Scandal was Dynasty and Dallas combined, on speed. You literally have no idea who you can and cannot trust.

Written by Karen Booth, Tempted by Scandal’s primary hero and heroine are Matt Richmond and Nadia Gonzalez. Matt is a billionaire entrepreneur and CEO of Richmond Industries. Nadia is his personal assistant of less than two years. After attending a charity gala together, the two fall into each other's arms. The next morning Nadia's photographed sneaking out of Matt's home in the early morning hours. The photograph ends up making a gossip website, thus putting pressure on Matt. The question becomes is Nadia someone Matt can trust, or did she tip off the photographer in order to get something out of him? This is a mystery that will surprise you.

Karen also laid the solid groundwork for Liam Christopher and Teresa St. Claire, the hero and heroine of the fourth book, Redeemed by Passion, written by Joss Wood. Liam and Teresa have a complicated relationship, to say the least. Their awareness of each other goes back seven years when Teresa was one of his father’s students. Liam has a huge distrust of Teresa and she has no idea why. Most of Tempted by Scandal deals with Liam and Teresa. I will say things are not as they appear between these two.

There's a reason why I made a promise to myself to read Karen Booth past and future. She's an incredible storyteller. She has this ability to suck you into a story and make you invested in what's happening. In my opinion, she had a tough job in setting up the series and establishing the relationships of not only her characters, but the characters of all the other authors. A lot of her story dealt with Liam and Teresa, thus truly making her central story of Matt and Nadia seem more like a novella. Their story is complete but Tempted by Scandal ends on one heck of a cliffhanger. When I say shockwaves, there are shockwaves.

I have no idea where the next story will take these characters. I’m sure there will be more sexy times, more lies, more backstabbing, more scandal, more blackmail and more “oh my gosh” moments. The mystery arc has started. How that will all play out will be anyone’s guess. Bring on Cat Schield’s Taken by Storm.

The Dynasties ~ Secrets of the A-List Series: