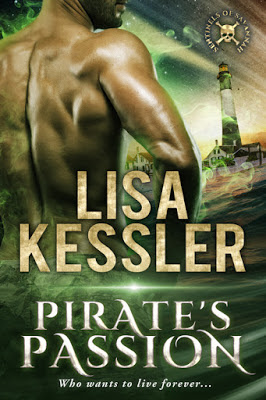 Who wants to live forever...

Samuel Keegan used to man the wheel of the Sea Dog over 200 years ago, but these days he’s the front man of a southern rock band. Rum and women are plentiful, but his world is changing rapidly now that his crew is back together searching for the Holy Grail to break their curse. But the quest leads him to a historian with raven hair and a wicked smile. She holds all the answers, but she could also spell death for them all.

Dr. Charlotte Sinclair works for the Maritime Museum in Savannah, an expert on ancient pirate wrecks. When a government agent requests her help in a top-secret investigation, she discovers not only is the Holy Grail real, but the lead singer of her favorite band is actually the immortal pilot of the Sea Dog crew.

The search for the Grail opens some dark secrets better left hidden, and Charlotte's life might depend on one Pirate's Passion...

Once again, Lisa Kessler has captured my attention with a story about otherworldly pirates. Legend has it that in 1795 the pirate ship Sea Dog sanked off the coast of Savannah, Georgia. Before it sank, it was believed that the men on board stole and drank from the Holy Grail, thus making them immortal. Historian Dr. Charlotte Sinclair knows all about the stories of the Sea Dog. In fact, she’s even written a book about the ship and its members. Little does she know that the stories she’s written and read about are true. Charlotte is about to fulfill a dream by meeting not one, but all of the crew members and her life will forever be changed.

Samuel Keegan has lived hundreds of years. In present day Savannah, he may not be a pirate, but he does find ways to keep the pirate inside of him alive. Keegan is the frontman for a southern rock band called The Scallywags. In fact, their closing number is always him doing a solo rendition of a pirate shanty, dressed in a duster. No one but him knows the shanties and the leather frock coat he wears are authentic. During a performance, Keegan becomes enamored by a raven haired lady named Char. She’s unlike anyone he’s met before.

In the first book, Magnolia Mystic, the Sea Dog crew was approached by Agent Bale of Department 13, a secret US government agency that deals with the paranormal. The agency has known about the pirates for years, but when the Holy Grail goes missing, the government wants the crew to return to their thieving ways and steal it back. In return, the crew will be allowed to drink from the Grail one more time. To assist the pirates, Agent Bale brings Dr. Sinclair into the mix. He has a feeling there’s more to her than meets the eye. But she’s also done extensive research and he hopes she can help figure out who the pirates should be looking for.

Imagine Keegan’s surprise when he’s forced to meet with the historian, who turns out to be the fun and playful Char he met the night before. As the two start to work together to locate the Grail, they realize their attraction is too strong to ignore. Keegan realizes their biggest difference will be their undoing. Keegan is immortal and plans on living forever. Charlotte is human and will one day die. Keegan knows he isn’t strong enough to witness someone he loves die. But when their investigation leads to danger and that danger leads to life and death, Keegan and Charlotte are going to have to decide if their love is worth fighting and dying for.

Lisa is truly an amazing writer. It was so easy to visualize the words on the page. She’s even added a surprise that readers of her work will recognize and enjoy. My only question now is what does Lisa have up her sleeves for the rest of this series.

The Sentinels of Savannah Series:

You can read and excerpt of Pirate’s Passion here.

LISA KESSLER is an Amazon Best Selling and award winning author of dark paranormal fiction. Her debut novel, Night Walker, won a San Diego Book Award for Best Published Fantasy-Sci-fi-Horror as well as the Romance Through the Ages Award for Best Paranormal and Best First Book. Her short stories have been published in print anthologies and magazines, and her vampire story, Immortal Beloved, was a finalist for a Bram Stoker award. When she's not writing, Lisa is a professional vocalist, performing with the San Diego Opera as well as other musical theater companies in San Diego.