Hero Profile & Excerpt ~ HAVING IT ALL by Christi Barth 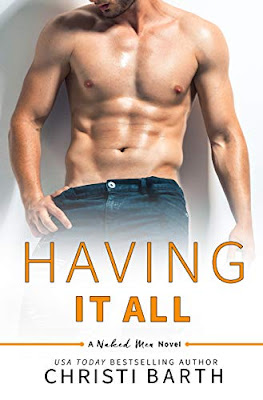 Josh Hardwick’s life looks great. He lives with his best friends, runs a gourmet food truck, and spends his nights hooking up with every eligible woman in D.C.. But he hides his daily struggle with dyslexia--which holds him back from expanding his business. The last complication he needs is a relationship. Especially not with an off-limits friend who is dangerously hot...

Annabeth Vasquez wears combat boots because life is a war zone and she damn well intends to be a survivor. She’s clawed her way out of poverty and is still in shock at her amazing new job. Failure isn’t an option. So being distracted by Josh’s playboy moves is definitely out of the question. The boutique job puts her in the middle of his circle of rich, educated friends. Annabeth can’t believe they accept her--or that Josh wants her.

Dating a player always ends badly, and Annabeth can’t risk losing her job. No matter how well Josh kisses... Her job’s at stake. Josh’s friends will kill him if he screws up and hurts her. But they can’t ignore how long--and how much--they’ve wanted each other. So when Josh comes up with a plan to test-drive their relationship, Annabeth’s on board. Will they be able to move beyond their complicated pasts and fears and discover love makes it possible to have it all?

Date of birth: hahaha. I’m not that kind of a writer. Unless I can make a joke about his astrological sign, I don’t assign birthdays.

Physical Description: Tall, ripped & blonde. His best friend Griff, who is often mistaken for his brother, says the difference is that Josh has a smarmy, toothpaste-ad smile thing going on. The women of DC do not seem to mind…

Drink of choice: Beer. A dark-ass stout, or the latest bizarre brew Dogfish Head’s cooked up.

Favorite food: Spaghetti bolognese with a mountain of parm on top.

Favorite song: Sexy Back by Justin Timberlake. Because Logan sang it to find them when they were marooned in the Alps, near-death. It will always be the best song in the world, because it signaled rescue. And that they’d get food soon.

Favorite way to spend an evening: Cocktails on the roof deck. Grilling with his friends. Then the booty call du jour.

Best memory to date: Playing soccer with his best friends. Every damn time.

If you could have a do over, what would you do differently? Nothing. My life’s great- I’ve got my friends, my food truck, and a different beautiful woman in my bed every time I want one. Haven’t you heard of the butterfly effect? Why would I want to mess with perfection?

Is it possible to survive tragedy and find happiness again? Damn straight. What’s the point of surviving if you don’t find happiness every single day?

Most romantic gesture: You don’t need romance to get a woman into bed. Not with my looks, charm, and skills in the kitchen…

Words to live by: Your friends—the family you choose—are the most important thing in your life. Choose wisely.

“Look, I haven’t done this”—he wagged a finger back and forth in the small pocket of air between them—“before. I like skimming the surface, playing the field. But I don’t want to play around with you, Annabeth.” Josh almost paused to take a deep breath. Then he realized he didn’t need one. Didn’t need to steel himself to keep going. “I want to get serious. I want to give it a try. Actually dating. Like you said, we’re friends already. That’s the first step. I just want to take the next one with you.”

“That’s an enticing offer.” Her fingers moved across his chest, tracing the top edge of the lettering that spelled out Capitol Grilled on his sweatshirt in red script. “And I’ll pay your honesty back with my own. I’ve wondered about this, about what it would be like with you, for years. You’re so much fun, Josh.”

Huh. Why did that feel like an insult? Like Annabeth was writing on the toilet stall door, For a good time, call Josh Hardwick? “Fair warning—I don’t smile all the time. Real life does get to me, just like everyone else.”

“No, it was a compliment.” Now she patted right over his heart, as if she’d noticed the edge to his tone. “I get focused, or sometimes I get in a rut. I don’t lift my head up often enough to laugh and enjoy like you do. I love that you’re this burst of fun and lightness. Your loyalty to the guys is awe-inspiring. Your patience working with at-risk youth is amazing. And if you let that smile shield of yours slip, I bet I’d like what’s behind it. I want to find out.”

That all sounded good.

Clearly, Josh hadn’t convinced her. Not enough. So he decided to throw a Hail Mary.

Toss the ball from half-court and hope for the best.

God, he couldn’t believe he was saying the words even as they fell from his lips. “How about we take sex off the table?”

“The table? Shouldn’t we start in a bed?”

Normally, Annabeth’s utterly literal interpretation of the world amused Josh. This morning? It was just another damned speed bump in this conversation. “You’re missing my point. I’m saying how about no sex? We take it slow. Old-fashioned-style dating. To reduce the risk of my apparently inevitable fuckup.”

She backpedaled out of his arms. Kept going until her back met the refrigerator. Then Annabeth’s jaw slowly dropped. “You’d give up sex?”

With a snort, Josh said, “Not forever. But, yeah. For you. To be with you.” He moved forward to get right in front of her again. Proximity—to him—seemed to throw her off-balance.

“You’ve slept with half the women in D.C.” It was spit out like an accusation.

More like two-thirds, he thought smugly. “And I could keep working my way through the other half. But I’ve been there and done that. I can get sex, Annabeth. I finally want something more. I want you.”

Her hand slowly fluttered up to her chest. Then the other one joined it. The whole time, her eyes never left his. “That’s a powerful proposition.”

Only if it worked. Josh brought his own hands up to hold hers in place over his heart. “I mean it. Every word.”

“It’s powerful, and a little off-kilter. Irresistible, though. Just like you.” Annabeth licked her dusky lips and cocked her head. “Also? That’s probably the most romantic thing that’s ever been said to me.”

It always felt good to get the first point on the scoreboard. But he also wanted to make sure the rules were clear. “Ah, to clarify, I do want to have sex with you. I’m just willing to wait.”

“I heard you. That’s what’s so romantic.” And the smile she gave him was one he’d never seen before. There was a layer of tenderness cloaking the ever-present sexiness.

It was the most beautiful smile she’d ever aimed at him.


Purchase Having it All from:
Amazon | Barnes & Noble | Kobo | Goodreads