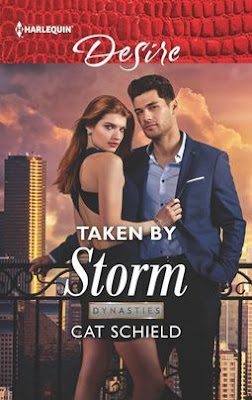 “You don’t believe in romance?

Let me change your mind…”

Concierge Isabel Withers vows to turn The Opulence hotel into Seattle’s top romantic destination. But first she has to convince Shane Adams, her no-nonsense boss, that the project has merit. When a freak storm strands them at the hotel—leading to a night of passion—it more than demonstrates her point! But is the self-proclaimed romance expert in over her head this time?

Taken by Storm is the second book in the Dynasties: Secret of the A-List series. The first book Tempted by Scandal should be read first, if you plan on following along with the mystery arc. Taken by Storm is an office romance, featuring Shane Adams, President of the Richmond Hotel Group, and Isabel Withers, concierge of The Opulence Hotel.

I like the love story of Shane and Isabel. In its entirety, it's a simple, straightforward romance. Isabel has had a thing for Shane for years, the whole time she's worked at the hotel. But he is totally oblivious to her. The biggest obstacle between these two seems to be Shane getting out of his own way and being open to make room in his life for something or someone other than work. Their story has a happily for now ending. There seems to be some remaining issues or questions regarding these two. I hope to see more of them in the next book, Seduced by Second Chances, written by Reese Ryan.

Looking at the current books in this series, Taken by Storm was a let down. Karen Booth set up this wonderful mystery in Tempted by Scandal. I thought the mystery would continue in Taken by Storm, but it was nowhere to be found. I'm happy that Cat still continued with the same intense feelings Teresa and Liam bring out in each other. I was worried that I loved what Karen did with them so much that no one would be able to continue their storyline properly. I just wanted more from Taken by Storm, namely the mystery and the drama. That is not to say that Cat isn't a good writer. I think she is. But she had some big shoes to fill after reading Karen's book and being blown away by it.

I'm invested in the mystery of the series. I really hope Seduced by Second Chances brings back the mystery and drama, I didn’t know I wanted but love so much in Tempted by Scandal.