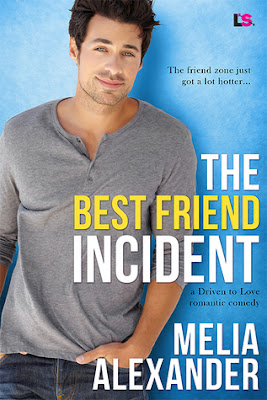 The friend zone just got a lot hotter...

Stacey Winters is in love with love, but so far, she’s only found Mr. Dud, Mr. Cheater, and Mr. Boring. Even though her best friend Grant isn’t an option, at least being around him offers her a window into the male psyche—and sets the bar high for her future Mr. Right.

But then she accidentally crosses the friend zone and kisses him, and it starts to feel a little too much like he might be what she’s been looking for...

Grant Phillips doesn’t do relationships. A casualty of the foster care system, he knows people are just looking for a reason to bolt. "No attachments" is his hard and fast rule. There's only one exception: his best friend, Stacey. He refuses to jeopardize what they have.

But now that he knows how good it felt to kiss her, felt the addictive slide of her body against his, Stacey Winters is indelibly stamped onto Grant's brain—and not just as his friend.

He is so screwed.

Friends to lovers is one of my favorite romance tropes. After all, they say the key to a good relationship is friendship.

Stacey Winters and Grant Phillips have been best friends since they were young kids. Stacey is from a large family of all girls and Grant grew up in various foster homes. Stacey believes in love and wants a marriage like her parents have. Grant doesn’t believe in love or relationships. His thought process is simply that people leave so there’s no use trying. The only people he’s really close to are his foster brother, Aiden, Stacey, and her family.

When Grant has a downright awful date, he goes to Stacey’s apartment only to find her current boyfriend there. After the two exchange some words, Grant is the last man standing. Tired from the night, he lays down in Stacey’s bed. Expecting to find her boyfriend in bed, Stacey climbs in. The two end up sharing a mind-blowing passionate kiss, only to realize the person they're kissing isn't who they think it is. Not wanting to risk their friendship they each try to pretend the kiss never happened. Too bad they keep finding themselves in intimate settings that lead to more kissing. Eventually, the kissing leads to more and they find themselves in an unintentional relationship. That's until past hurts and questions of the future emerge.

The Best Friend Incident had plenty of funny moments. There was also a heartbreaking moment. I would have loved to have known more about Grant’s past. I question how Grant and Stacey were able to remain friends when he moved around a lot in foster care. While I like them as individuals, I just felt like I was missing something.

The Driven to Love Series:

Melia Alexander is the author of sassy, sexy, fun contemporary romances, but is also fortunate to spend her weekdays at The Male Observation Lab (a.k.a. her job at a construction company) where she gets to observe guys in their natural habitat. Though they often behave like typical alpha males, she's often seen through their personas to the heart of who they really are - the heroes of their own stories. A native of Guam, Melia traded in warm, tropical breezes for the rainy Pacific Northwest. She's an avid reader who also loves romantic comedies - preferably with a glass of Cab Sauv and a box of dark chocolates nearby. In her free time, she's busy conquering her CrossFit fears: ring dips, power cleans, and the dreaded 800 meter run.