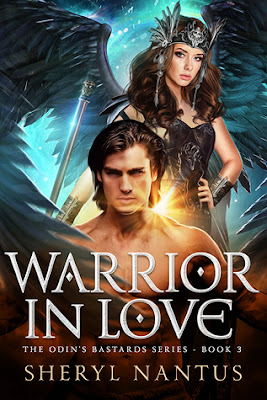 Special Agent Trace Dyson races around the world, retrieving priceless artifacts from criminals. But his one dream is to recover a spear, stolen from The Valkyrie's Tomb. It's his family's White Whale, his father and grandfather's unfulfilled mission––and when he sees a beautiful and mysterious woman steal a bracelet from the tomb’s exhibit, he’s intrigued. Before he takes her to jail, he has a few questions.

Laila Nyland is a Valkyrie on the edge––worn out from her duties, her final mission is to come to Midgard and find a mystical spear lost centuries ago. Forced into a partnership with Trace, she can't help but be attracted to the hardcore treasure hunter even if he drives her up a wall. The more she learns about him––the harder it is to lie to him about her mission.

Before their secrets rip them apart, these two will be responsible for saving the world––that is if they can trust each other longer than two minutes.

I went into reading Warrior in Love, the third book in Sheryl Nantus’s Odin's Bastard series, with a mixture of anticipation, excitement, and dread. Excitement and anticipation because I love the series and couldn't wait to read the book. Dread because this is the final book in the series and I don't want it to end.

Warrior in Love finds Valkyrie Laila Nyland at her breaking point. For centuries, Laila has been tasked with taking evil souls to Helheim. She can no longer take the pleas and cries for salvation nor the shocked looks when one’s soul and spirit leaves their body. Understanding what Laila is going through, Frejya asks her to complete one last mission. Laila is to go to Midgard (Earth) and retrieve a spear disguised as a walking cane of a fallen Valkyrie. To do so, she must first visit the museum where Mala’s tomb is located and retrieve the bracelet she is wearing. The bracelet will then guide Laila to where she can locate the spear.

Trace Dyson has lived his life believing in the retrieval and returning of stolen artifacts to their rightful owners. At times, the work is tedious and often dangerous. Being recruited by Interpol fresh out of college allowed him to continue the family legacy of hunting down treasures. After all, it was what his father and grandfather did. Trace has been fascinated with The Valkyrie’s Tomb for as long as he can remember. In fact, after the tomb was raided during World War II and its items scattered all around the world, it was his father and grandfather who retrieved two of the items. The only item left to retrieve is the cane. “And now, it was his turn-his duty, his charge to find the cane and bring it back.”

Crossing paths in New York, Laila and Trace agree to work together to retrieve the cane/spear. Both agree the cane/spear should be back where it belongs. Trace has every intention of returning the cane back to the museum tomb. Laila plans on taking the spear back to Valhalla where it belongs and where it will be safe from the Fenris Wolf. Their search takes them from New York to Los Angeles to Chile where surprises await. They find themselves in a “no retreat, no surrender” situation. “Fate loves the fearless” and the fate of mankind and the world rests in their hands. One thing is for certain, their lives and the lives of those who conspire against them will be changed forever.

It was so easy to lose myself into the pages of Warrior in Love. Sheryl captivated my attention with the first sentence and kept it until the very last word. While this is the third and final book in the series, it is truly a standalone read, without mention of the previous characters. I love that all the heroes in this series are so different. The only thing they really have in common is their honor, courage, and willingness to sacrifice themselves for the Valkyrie they love. Thank you Sheryl for introducing me to Valkyries and piquing my interest with their strength, power, courage, love, and loyalty.