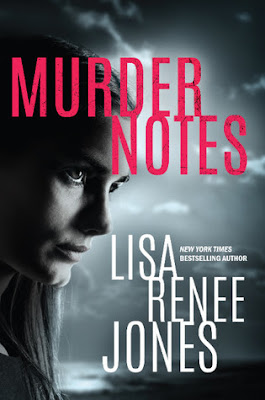 As an FBI profiler, it’s Lilah Love’s job to think like a killer. And she is very good at her job. When a series of murders surface—the victims all stripped naked and shot in the head—Lilah’s instincts tell her it’s the work of an assassin, not a serial killer. But when the case takes her back to her hometown in the Hamptons and a mysterious but unmistakable connection to her own life, all her assumptions are shaken to the core.

Thrust into a troubled past she’s tried to shut the door on, Lilah’s back in the town where her father is mayor, her brother is police chief, and she has an intimate history with the local crime lord’s son, Kane Mendez. The two share a devastating secret, and only Kane understands Lilah’s own darkest impulses. As more corpses surface, so does a series of anonymous notes to Lilah, threatening to expose her. Is the killer someone in her own circle? And is she the next target?

Murder Notes is the first book in Lisa Renee Jones’s series about FBI Special Agent Lilah Love. It’s also the first time I have read this author. Murder Notes was a good book. It could have been great, but I felt like it started off slower than it should have considering the fact that Lilah curses like a sailor and is a hot mess. That generally makes for a fun-loving thrill ride based on other books I have read similar to this one. Considering the subject matter, maybe I just set my expectations too high.

Lilah Love has been in Los Angeles for two years and she has nightmares about something that happened to her back in her hometown of The Hamptons. Interestingly enough, her most recent case has similarities to that incident. To add insult to injury, a murder in The Hamptons, similar to her current case gets her sent back to her hometown to find out if it is the work of a serial killer. Without giving too much away, let’s say Lilah’s past and present collide on multiple levels. Her brother is the Police Chief in The Hamptons and her father is running for office. In addition, her ex-boyfriend Kane Mendez is now running his alleged crime family. All of this makes matters very complicated considering Lilah is sure her family and so called friends may be connected to both her shadowy past and this somewhat shady present. The suspect list gets longer as Lilah gets deeper into the investigation.

There are a lot of layers to Murder Notes. That’s both good and bad. The complexity of the investigation makes the book very interesting. Where I had issue is that when I finally got into a rhythm, the book ended. I can’t even say that it ended on a cliffhanger, it just ended. Clearly, it continues in the next book but I wish I had known that ahead of time. I felt let down and that I had wasted my time getting invested. I will definitely read the next book, Murder Girl, because I have to know the whodunnit but I hope the second book continues at a faster pace than how this one started. Lilah Love is a likeable character and I really want to know how she figures this all out and how this will affect her future.