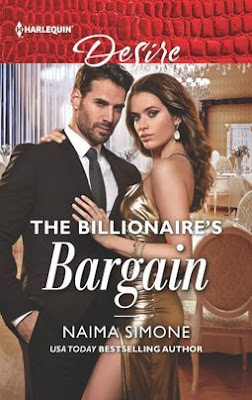 When a blackout hits Chicago, billionaire Darius King makes the most of it with an irresistible stranger. But then the lights reveal the woman in his arms is the woman he hates--his best friend's widow! His new plan: entice her into marriage to protect his friend's legacy. But wild attraction and explosive secrets could make that arrangement very inconvenient...

Naima Simone’s The Billionaire’s Bargain is an enemies-to-lovers, fake engagement, forced proximity romance. The blurb intrigued me. The fact that Naima is an incredible author had me grabbing this book.

For me, part of the magic of this story was that I had no idea what to expect from this 218 page book. I’ve read Naima before so I knew I was going to have a very strong-willed heroine, with an alpha hero who thinks he knows everything and wants to be constantly in control. I got that. But also got family drama, secrets, a story of friendship, and redemption, but most of all a romance for the ages.

Darius King was an only child born into privilege. When his parents died, his best friend Gage Wells and the Wells family became his family. The Wells took him into their home and treated him as a son.

Isobel Hughes was a young, naive, twenty-year-old when she met Gage Wells, the son of one of Chicago’s oldest and wealthiest families. Their love affair was fast and hot. They married within months after meeting and within a year welcomed a son. But things weren’t perfect. Gage’s parents didn’t like her from the start. They assumed she was only with him for money, after all she certainly didn’t have any. By the time the marriage finally fell apart, Gage had branded Isobel as a cheater and someone who wanted to climb the social ladder. He even said he didn’t believe their son Aiden was actually his.

With the passing of Gage, everyone’s life has been put in a talespin. Things have not been good for Isobel, Aiden, or the Wells family. It’s been two years and Isobel finds herself crashing an ultra exclusive invitation-only gala, with the hopes of finally talking to the Wells in order to help her son have a better life. But before that can happen, there's an entire city blackout. With the lights out, Isobel and Darius seek comfort in each other, not knowing who the other person is. The next morning, Isobel is appalled to wake up in Darius’s arms and he is just as upset at revealing his secrets and betraying his best friend. Darius knows Isobel was only at the gala to make trouble for the Wells and he isn't about to let her hurt his family once again. Darius proposes a marriage of convenience, in that he will give Aiden a safe and secure home and make sure he never wants for anything. But he makes it clear that he doesn't trust her and that the Wells will be a part of Aiden's life.

This is only the start of an incredible story. I can’t say more because I loved that I was surprised by what I found on the pages. Naima Simone is captivating. I love how she immediately drew me into the story. I felt for these two scared characters immediately. Their coupling was magnetic. I loved that the ending wasn't all rainbows, sunshine, and hearts. The ending was real and it truly made sense. The Billionaire’s Bargain was the perfect book.

**Received a copy from the author and voluntarily reviewed. Also purchased a paperback copy personally.**