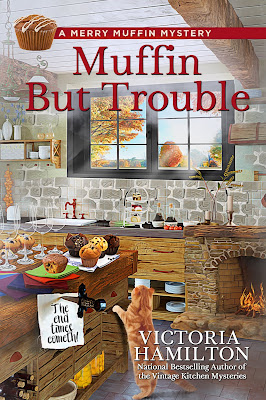 In the new Merry Muffin Mystery from the author of Muffin to Fear, baker Merry Wynter must confront a spiritual guru who may be up to something far from heavenly...

With plans for a new performing arts center at Wynter Castle taking up all her time, baker Merry Wynter has been all but unaware of the fringe group compound near her small town—until a street preacher accosts her with taunts of doom and damnation. Worried that some of her close friends may have been lured in by the group and its charismatic leader, Merry begins digging into the ministry—and soon suspects they may have ties to the recent death of a young woman and the disappearance of many others.

With her rebellious teen friend Lizzie at her side, Merry steps in to confront the eerily submissive community and its misguided members, skeptical of their supposed spiritual leanings. When another young woman vanishes and Merry realizes the lives of people close to her are at stake, she will stop at nothing to uncover the group’s sinister secrets before the murderous ministry can strike again...

Hi Victoria. Welcome back to Read Your Writes Book Reviews. How are you?
I’m great, and happy to be continuing the Merry Muffin series… it’s been a couple of years!

It has been. Congratulations on the continuation of the series. The Merry Muffin series is a new series for me, as I haven’t read any of the previous books. What can you tell me about the series?

Merry Wynter arrived at her inheritance, a real American castle in western New York State, intending to fix up her ancestor’s castle to sell so she could get back to New York City, where her life was in shambles, (widowed, jobless, her reputation in tatters) but at least she had friends. However, a murder mystery ensued, she made friends in the town of Autumn Vale, and soon grew to love it, even more after two beloved friends, Pish Lincoln and Shilo Dinnegan, joined her. Now, a few years later, she can’t imagine living anywhere else. Her only goal has been… how to keep her castle? It’s quite the money drain! And one question… why do murders keep happening??


Are the books standalone reads or do they need to be read in chronological order?
I always aim to make my books coherent enough to be read separately, but of course for maximum enjoyment and engagement with the cast of characters I’d rather readers start at the beginning (in the case of the Merry Muffin Mystery series, with Bran New Death) and read forward!

Tell me a little about the protagonist, Merry Wynter, and some of the secondary characters in the series.
For the first time ever I will be including a cast of characters at the beginning of Book #6, Muffin But Trouble, coming out July 2nd. But here is a brief run-down of some folks:

Pish Lincoln: Merry’s best male friend, and partner in a new venture. Of course he’s more than a friend; he’s the father she never had, a confidante, business partner, and her rock.

Doc English: Irascible senior and Merry’s living link to her past. Doc knew her father, her grandfather and her Uncle Melvyn, who left her the castle.

Janice Grover: Merry’s eccentric opera-loving Autumn Vale friend. Janice’s amazing (in the best/worst way) rendition of the Queen of the Night aria from The Magic Flute is still being spoken of with awe in Autumn Vale.

The latest book in the series is Muffin But Trouble. What can you tell me about it?
Merry and Pish have gone into business together to develop her property into something special, so she is stressed and anxious. However… she is never too busy when Lizzie unloads her worry about her best friend Alcina, who is kind of missing, and when friends Hannah and Zeke ask Merry to help with their friend Gordy Shute, who has moved out to an extremist encampment on farmland out of town. Trouble ensues, and Merry and her friends need to rescue the vulnerable and solve a crime.

When you sit down to write your mysteries, do you already know who the killer is and why they did it, or are you just as surprised as the readers?
It can go either way. I often know who did it and why, but sometimes, as with Muffin But Trouble, it surprises me! I’ll get to a point in the book and go, “Aha! THAT’S who did it!” Then I have to retrace my steps and make sure I give enough clues that the reader could, potentially, figure it out, if they are noticing.

Last question. If Merry was a real person and I could sit down and talk with her, what do you think she would say about you?
She’d think I was boring! LOL. I don’t go out much. My idea of a good time is tea, a cat and a book. Merry’s life is much more exciting than mine. And she’d find my taste in wine abysmal… I prefer the cheap stuff. However… she’d find me a good conversationalist! We could talk about opera, (I’m a newer fan of opera) and I could pick her brain of what ones she has seen live.

Victoria, thank you so much for your time and for answering some questions for me.