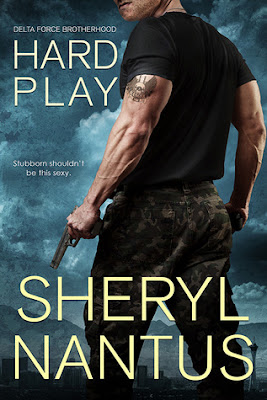 Stubborn shouldn’t be this sexy...

Ex-special forces ranger Dylan McCourt is a stone cold killer who cares only about his military brothers and doing what’s right. He’s used to giving orders and has zero patience for bullshit. Most people tremble when they look him in the eye, but not his infuriatingly sexy new rescue mission, Jessie Lyon. She just juts her chin and says she’s not leaving without clearing her father’s name, to hell with his rules. And was that a one finger salute he sees in her eyes or his imagination? Either way, he knows this is one job his training might not have prepared him for.

For fans of Maya Banks’ KGI series, prepare to meet the men of the Delta Force Brotherhood, a sexy new contemporary series where kicking ass and living hard is just how they roll.

I discovered Sheryl Nantus when I started reading her fantasy romance series Odin's Bastards. I LOVE that series! I honestly questioned whether or not she could pull off a romantic suspense as good as, if not better than that series. I don't even know why I was skeptical.

From the beginning, I was captivated. Hard Play had the suspense I look for in a romantic suspense. This wasn't a gory story with guts and blood. The romance was steamy and well-placed.

Hard Play is the first book in the Delta Force Brotherhood series. The Brotherhood consists of former special forces members who have come together to help people who have nowhere else to turn. Led by former Ranger Dylan McCourt, the group doesn't ask for payment but uses the favor system. Meaning they'll help you out but will call on you in the future, if they need something. The group works under the radar out of their nightclub The Devil's Playground.

When former Las Vegas Police Detective turned private investigator Jessica “Jessie” Lyon goes missing, her best friend Lisa Boudreau goes to the Brotherhood for help. The Brotherhood learns that Jesse has been kidnapped by mobster Edward Molodavi. They set out to rescue Jessie and are successful. They just never expected Edward to refuse to let her go. Edward ups the stakes and makes Jessie a wanted fugitive. In order to clear her name and end Edward’s illegal activities, Jessica and the Brotherhood go to war against Edward. The stakes are high with loyalties and alliances being questioned. One thing for sure is that Vegas and the Brotherhood will be changed forever.

I loved all the characters in the story. Yes, even mobster Edward Molodavi. You literally had no idea what he was going to do next. Dylan caught me off-guard with his instant infatuation for Jessie. Jessie is a true survivor. She's smart and tough and refuses to back down. They are really good together. They complement each other and work well together. I'm looking forward to reading the next book. It should be noted that this is not a motorcycle club story.