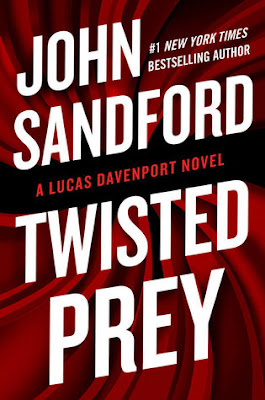 Lucas Davenport had crossed paths with her before.

A rich psychopath, Taryn Grant had run successfully for the U.S. Senate, where Lucas had predicted she'd fit right in. He was also convinced that she'd been responsible for three murders, though he'd never been able to prove it. Once a psychopath had gotten that kind of rush, though, he or she often needed another fix, so he figured he might be seeing her again.

He was right. A federal marshal now, with a very wide scope of investigation, he's heard rumors that Grant has found her seat on the Senate intelligence committee, and the contacts she's made from it, to be very...useful. Pinning those rumors down was likely to be just as difficult as before, and considerably more dangerous.

But they had unfinished business, he and Grant. One way or the other, he was going to see it through to the end.

There are so many books in The Prey series at this point that I can’t tell you where Twisted Prey falls in the sequence. I can say that I have not read them all but I am always able to get up to speed fairly quickly. It’s like catching up with an old friend who just so happens to be a badass law enforcement officer.

Lucas Davenport is a US Marshall who has a reputation for getting the job done at all costs. Lucas is not only smart, but he is wealthy and exciting to watch as he does his investigation. This time, Lucas is asked by a U.S. Senator to investigate a car accident that was clearly an assassination tempt. The best part is that the main suspect is another U.S. Senator that Lucas has had a run-in with in the past. As Lucas and his partners get closer to uncovering the truth, the greater the risk. Luckily, Lucas is always up for the task. The action is exhilarating and there are a lot of great plot twists. It is truly a fun ride. I felt like I was right in the middle of the investigation. There are a lot of moving parts and as is always the case, the villain is driven by power. She already has money.

Although this isn’t a mystery, there isn’t much to say without ruining the fun. There’s politics, murder, and mayhem. What more could you ask for? I look forward to reading another book in the series.