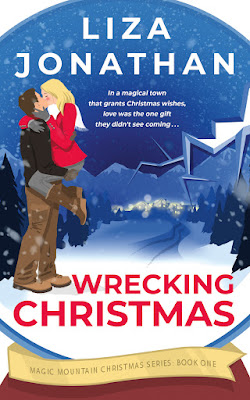 In a town that magically grants Christmas wishes, love was the one gift they didn’t see coming.

The perfect Christmas. After the tragic loss of her mother, it’s all psychologist Kathryn Winslow wants for herself, her young son, and her grieving father. She never expects their drive to a luxury resort to end with her car dangling off the side of a mountaintop cliff. And she certainly doesn’t expect her family to be rescued by a sexy, rugged puzzle of a man like Hunter Holliday.

As owner of a collision repair and hot rod shop in the West Virginia hills, Hunter hauls motorists out of snow banks every day. But after years of sleepwalking through his life as a widower, saving a brave, beautiful woman like Kathryn wakes him up, in every possible way.

But before they can make it out of a freak snowstorm, they’re stranded in Christmas Pass, a funny little sugar-frosted mountain town that can’t be found on any map. Now somehow, they’re trapped in an enchanted village that grants Christmas wishes, and tangled in a red-hot attraction they can’t resist. Yet, even in a place that’s populating itself around their craziest whims and deepest desires, they can’t run from the crippling regrets in their past—or the shocking new revelations to come. But the love they need so badly is there for the taking…if only they have the courage to wish…

Hi Liza. Welcome to Read Your Writes Book Reviews. You're a debut author. Why did you decide to start writing romances?
It could be the insanity that comes with middle age. But I had a bit of an epiphany lately when I put my DNA into Ancestry.com. I found out, to my utter shock, that both sides of my background were about as “old West Virginia” as you can get, coming to America as indentured servants in the mid 1600s. Turned out I was directly related to the founder of my hometown, Fairmont, West Virginia. And honestly, that revelation really spun my head around.

It occurred to me that there are too few people telling the good stories coming out of the mountain states. And I want to be that storyteller--the person that's romancing Appalachia. My books tell fantastical love stories, but the beauty of the place and the people? That's all true.

What kind of books do you write?
My books are paranormal romances, but with a magical, Appalachian twist. Not every book is set in the mountains, mind you. But they celebrate the love, lore and locations that can be found in the thirteen Appalachian states, which is basically New York to Georgia. All my books are big, emotional and sexy--fun reads and a great escape. A little “everyday magic” we all can experience.

What inspired you to write a holiday romance like a Wrecking Christmas?
It all started when I was going through my RSS feed one day, and I came across a piece on the Smart Bitches, Trashy Book Blog called The Painful Fantasy of Holiday Romances. Written by Amanda, one of the bloggers there, it was a very heartfelt missive about how people with difficult family lives read holiday romances differently. For them, stories where no one has any real problems and everything can be worked out by winning the cookie bake off can be hard to take. “Some of us,” she said, “ will never have a good Christmas.”

I found I couldn’t leave the ideas she brought up alone. What would happened, I wondered, if I wrote a book for someone like her? So that was how I came up with Hunter Holliday and Kathryn Winslow. They are two people with very tragic pasts, for whom Christmas has been ruined, permanently. They have deep regrets and things they can't forgive themselves for. And they both get thrown together, completely by chance, in a magical mountain town they grants all their Christmas wishes. Yet, even here, in this perfect place, their baggage has hitched a ride with them. And against this improbable, Hallmark-movie-on-steroids backdrop, they have to work through all their problems and come out whole on the other side, together.

This book is steamy--not sweet--with a hard won happily ever after. I hope it inspires others the way it inspired me.

Tell us about the real locations you used in Wrecking Christmas.
I was very fortunate to get permission from the Greenbrier Resort to use them as a setting in this book. The Greenbrier, if you're not familiar with it, is one of the finest resorts in the nation, built in the 1700s in grand Georgian style in the cradle of the Greenbrier Valley. It has hundreds of rooms and is truly breathtaking. For Kathryn, it serves as a kind of El Dorado or Graceland. If she can just get her family there, they just might have the perfect Christmas after all, she thinks. But nothing goes according to plan.

I've also placed this Christmas series in Lewisburg, West Virginia, which is a small town neighboring The Greenbrier which is every bit as vibrant as I describe it. There's people who have been there for generations, and wealthy retirees who have moved there and brought rolling hilltop estates so they can be nearby to the resort. The Holliday family farm is exactly like dozens of farms in the area, situated on the prettiest rolling landscape you’ve ever seen. It's the kind of jewel people don't realize they can find in West Virginia, and I wanted to tell that story, too.

So we're going to see more Christmas stories coming out of Lewisburg?
Absolutely! I have the sequel to it already written and in development. It's the story of Hopper Vance, who works at Holliday Hot Rods with Hunter, and Cookie, who’s Kathyrn’s receptionist at her practice. Turns out, Hopper and Cookie are long lost loves separated by tragedy. And this will be a magically fueled second chance romance you won't soon forget. It's all about the persistence of the heart, and the journey to forgiveness. I can't wait to introduce readers to it next year! After that, I’ve got another one sketched out from the Holliday garage. But after that, who knows? I'm sure readers will inform me what they want to see next. And I'm all ears.

For a moment, the man's entire demeanor changed--his eyes going dreamy and dark with a slash of color rising across his cheekbones. Was he going to kiss her? God, she wished he would. Even under her coat, the hairs rose up on her arm, and she trembled with a kind of hot, physical awareness of him that made her breaths come in short. Hunter lean dangerously close to her lips, but then no. She must have been mistaken. He pushed himself up to his feet abruptly, holding his hand out to pull her up. She didn't want to admit it, but she felt a bit…

You're disappointed, aren't you?

Yes, she was. She could practically draw a heat map on her body of every place he’d touched her. And the thought of laying a scorching hot kiss on him was unbearably tempting. But he pulled away.
Why?

Should she just grab him and steal a kiss? No--no, she wouldn't. She promised herself she’d never beg a man for his affections again, and she meant it. So she settled for searching Hunter’s eyes for an answer. As she met his gaze, another flash of heat and vulnerability crackled across his expression, and then it was gone. 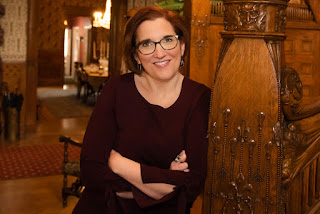 Write what you know. Isn’t that what they always say?

Though I currently live in the flat, flat lands of Indiana, I’ve spent most of my life in West Virginia, Kentucky and Tennessee. As I have found out, you can take the girl out of Appalachia, but you can’t take the Appalachia out of the girl.

So now, I write sexy, angsty paranormal romances dedicated to the locations, legends and lore from the thirteen Appalachian states. I find the enchantment of home inspires me to tell tales.

When I’m not haunting the house at all hours writing, I have another life as a PR/marketing writer, wife to my long-time husband, and a mother to my two sons, who are rapidly fleeing the nest. Come sit with me for a spell. I've got some stories to tell you...