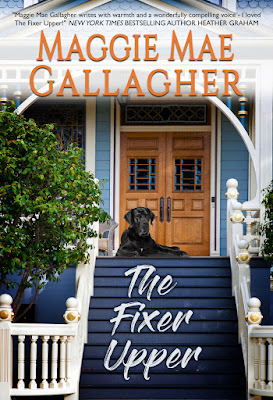 Hi Maggie. Welcome to Read Your Writes Book Reviews. Congratulations on the release of The Fixer Upper. I have to say, I like the sound of this book. Tell me about the book and what readers can expect from it.
Thank you so much! The Fixer Upper is the first book in my Echo Springs Series, where you will meet Abby. Now Abby just inherited her Great Aunt’s stately Victorian and she runs away from her life on the east coast, uncertain if the path she is on career wise is still what she wants. Her first night at her aunt’s house, she and Nate Barnes, have a rather awkward first meeting where sparks fly.

I love when a couple first meets each other. Tell me about Abby Callier and Nate Barnes, and what is it you like/love about them.
Abby Callier is what I like to call an old soul and the black sheep of her family. She tried to fit in and be what they wanted her to be, but in the end decided she needed to be herself, which was quite at odds with what her parents wanted for her and from her. I love Abby’s resilience and courage to break with the mold of her upbringing to find a life that satisfies her. Or at least, she’s trying to do that. It’s how she ends up in Echo Springs living next door to one sexy Sheriff Barnes.

Nate Barnes is the sheriff of Echo Springs. He was born and raised in Echo Springs. With the exception of going off to college and living in Denver for a few years, Echo Springs is home. He is steady, quietly rehabbing his home, and working to give back to the town. I’m such a sucker for Nate. He’s the guy that there’s no problem too big that can’t be solved, you just might need some elbow grease and some patience.

There’s this character I would really love to know more about. What can you tell me about Rufus?
Oh my goodness, Rufus! When I first started plotting and putting this story together, I never intended to write a dog. He just bounded onto the page and I fell instantly in love with him. He’s a one hundred and fifty-pound, three-year-old, black Great Dane who thinks he’s a lap dog. Nate adopted him as a puppy, and he plays quite a roll in bringing Nate and Abby together.

Generally, books tend to surprise authors in some way. What surprised you about this story?
There’s a secondary story line that runs through the book. It gutted me. I still can’t think about the couple without tearing up.

Oh wow. What was your favorite part of writing The Fixer Upper?
You mean besides the end? I loved getting to watch Abby and Nate fall for each other.

As you mentioned, The Fixer Upper is the first book in your Echo Springs series. What can readers expect from the series?
They can expect quite a bit more. I’m putting the finishing touches on the next book in the series, Civil Disobedience, as we speak. Then we will have both Beauty Meets Her Beast and Mooning Over Her Muffins to follow. I don’t have the release dates for them yet, but I always announce release news on my newsletter first, and then it goes out onto social media.

If you’d like to read a couple of excerpts from The Fixer Upper, you can here and here.

You can follow The Fixer Upper Blog Tour here.