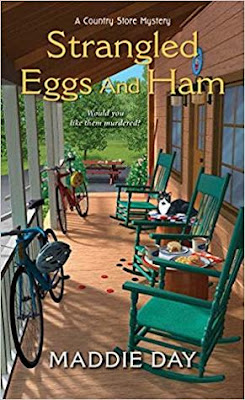 Robbie Jordan’s rustic country store is growing in popularity. But when a dead body appears, it turns out that Robbie’s home-style cooking attracts hungry customers—and murder!

While Robbie scrambles through breakfast orders for her expanding clientele at Pans ‘N Pancakes, tempers run as high as the sticky August heat in South Lick, Indiana. Real-estate developer Fiona Closs plans to build a towering luxury resort at one of the most scenic hilltops in Brown County, and not everyone can see the sunny side of the imposing proposition—including Robbie’s furious Aunt Adele, who doesn’t waste a minute concocting protests and road blockades. When tensions boil over and a vocal protester is silenced forever at the resort site, Robbie ditches the griddle to catch the killer. But if slashed tires are any indication, she’ll need to crack this case before her own aunt gets served something deadly next...

Strangled Eggs and Ham, the sixth book in Maddie Day’s Country Store Mystery series finds the citizens of South Lick, Indiana and the surrounding communities at odds with one another. South Lick and the Brown County area are known for its hills and scenic views. In fact, tourists from all over come to visit. Fiona Closs, a real estate developer wants to cash in on the tourism. Fiona wants to build a luxury resort at the site of one of the best hillside locations in Brown County. The construction and subsequent opening of the resort will bring in much-needed jobs to the area. However, at the same time, the construction will mess with the unguarded beauty of the hillside, bring far more people to the area, and affect the ecosystem.

Robbie Jordan has been hearing people talk about the resort at her restaurant/store Pans ‘N Pancakes. She doesn't have an opinion one way or the other about the resort. Robbie is surprised to find out her aunt Adele is vehemently opposed to the resort and plans to do something about it. While casually speaking with one of her B&B guests, Gregory DeGraaf, Robbie mentions the resort and that her aunt and several people are against it. Gregory, an environmental lawyer on sabbatical offers to represent the group for free. Everyone is shocked to learn another murder has taken place in South Lick when Jordan's friend Lou discovers Gregory's body at the construction site.

Robbie loves to figure out puzzles. So, of course, she's curious about who would have killed Gregory and why. Robbie has learned her lesson and isn't really trying to get involved in the investigation. However, you know what they say about curiosity. Before she knows it, Robbie becomes suspicious of several people who frequent her restaurant. When her aunt becomes a victim of various crimes, Robbie knows the resort and those who want it are at the heart of things.

Strangled Eggs and Ham proved to be a nice little mystery. Maddie Day did a wonderful job of keeping me guessing until the big reveal. My biggest complaint with the story is the way that Robbie talks. I don't know if I ever noticed before or if this something new. Robbie is a California girl who has only been in Indiana for a short time, approximately a little less than a year. It's completely possible for her to pick up some Midwest sayings. However, she is in her 30s and at times, sounds like she's a 60 to 70-year-old person. Regardless, I'm looking forward to the next book in this series.