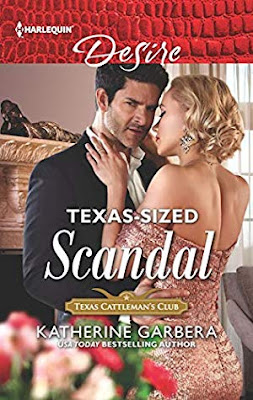 “I have no self-control around you.”

Now they’re the talk of Texas…

Melinda Perry has always been the well-behaved twin—until Slade Bartelli. Rumor has it that this billionaire has ties to the mob. All Melinda knows is that his touch is hotter than fire…and now she’s expecting his baby. A fake engagement might protect them from tabloid gossip. But will Melinda’s reputation—and heart—be safe given Slade’s dangerous past?

Do you love romance? Do you love a good mystery? Well, the Texas Cattleman’s Club: Houston series is for you. Admittedly, I haven’t read all the books in this series. In fact, I’ve only read book six, Off Limits Lovers written by Reese Ryan. But that was enough to get me hooked on this series. I tore through the pages of Texas-Sized Scandal. I like that you have a main couple and the story is all about them. What I’m learning is that there is a series main hero and heroine, and you get a part of their story as well.

Katherine Garbera’s Texas-Sized Scandal combines a couple of popular romantic tropes. The book effortlessly combines a forbidden romance with a surprise pregnancy and a fake engagement. If that wasn't scandalous enough, there's mention of mob ties and murder. This is the seventh in the series, but I think you can still read it as a standalone and get caught up on the mystery aspect.

Melinda Perry is a 39-year-old Houston socialite. Her father owns and operates Perry Holdings. Unlike her twin sister Angela, Melinda isn't a part of the family business. Instead, Melinda runs a foundation she co-founded and is on the board of several museums and charitable organizations throughout the city. This is in fact how she met Slade Bartello, who was filling in for his grandmother Philomena Conti at a board meeting. Slade is the son of a mobster but has never worked for his father or his organization. Instead, Slade runs Conte Imports, a company his mother’s family owns.

Melinda and Slade are surrounded by scandal. Slade has been living with rumors about his father for years. Melinda who prefers to be in the background has been thrust into the spotlight due to her father being accused of running a Ponzi Scheme and murder. The two have managed to keep their relationship quiet until a photograph of them appears in the local newspaper. Now the media and paparazzi are hounding them both. Melinda is prepared to break things off with Slade until he finds out she's carrying his child. Marriage and kids were never in Slade's plans, but he knows he has to protect Melinda and his unborn child from his father and his associates. Slade proposes they pretend to be engaged to get the press to leave Melinda alone. Reluctantly, Melinda agrees, knowing that she wants forever and that Slade just isn't that man.

I really liked the characters of Melinda and Slade. I loved watching them deal with the obstacles and challenges put before them. I liked Texas-Sized Scandal a lot. It just didn't blow me away. However, it was a story that had me reading into the early morning hours. I couldn’t wait to find out how this love story played out. I’ve only read two books in this series but the epilogues hook me every time! There are two more books left in the series. I think I might have figured out who the villain is, I just haven't figured out why. All I can say is bring on the next book!!

Tangled with a Texan by Yvonne Lindsay releases October 1, 2019