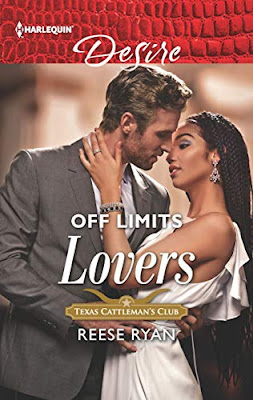 Everything is bigger in Texas—

For attorney and Texas Cattleman’s Club member Roarke Perry, Annabel Currin is about as forbidden as it gets. A just-jilted bride, gorgeously sexy, tender-hearted…and the daughter of his father’s nemesis. The sexual currents crackling between him and his client should have been warning enough. Now they’re both playing with fire. And someone’s gonna get burned…

Off Limits Lovers is the sixth book in the Texas Cattleman’s Club: Houston series. This is my first time reading this series, so I can definitely say it is a standalone read. The series consists of nine books, written by nine different authors. Each book has its own main hero and heroine, but you see characters from previous and future books make appearances. The series has a story arc of revenge and murder, but at its heart it is a contemporary romance. In order to get the full depth of the arc, it’s better to start the series at the beginning with Hot Texas Nights by Janice Maynard and read forward. Each book reveals more information to help you figure out who the villain is.

I was worried about not reading the previous books but immediately I was drawn into Off Limits Lovers by Reese Ryan. There was enough information for me to get an overall idea of what has been happening with the characters central to the series storyline. Roarke Perry and Annabel Currin are the hero and heroine of this forbidden romance. Both are extremely likeable characters. Seriously, the cover for this book could definitely be a picture of them. Upon first meeting, these two share an immediate attraction. In fact, days later they are still thinking about each other. Things get a little complicated when they find out who the other is. Annabel is the daughter of Ryder Currin, the man his older sister is dating, as well as the man his father despises. Add to that, Annabel has just broken up with her fiance weeks before their large, overly expensive wedding. In fact, upon learning who Roarke is, Annabel asks him to represent her in a suit against her ex-fiance.

Annabel might be young but she is nothing if not resourceful. There is a long list of reasons for these two not to get together but Annabel knows that Roarke is different from anyone she’s ever met before. For his part, Roarke has a million reasons, all of them valid, to not be with Annabel. Outside of the fact their fathers hate each other, there's the matter of her being his client and the fact that she lives in Houston and he lives in Dallas. Roarke isn’t looking for a relationship. He owns his own law firm in Dallas where he’s a champion for the underdog or those who can’t afford legal services. His job is his life.

Roarke and Annabel have this playful banter between them. They immediately want what’s best for one another. I love that they manage to understand and balance each other. As well as being drawn to the characters of Roarke and Annabel, I was equally drawn to the secondary characters too. I was especially intrigued by Maya Currin, Annabel’s younger adopted sister. She definitely has a story that needs to be told, and I think that story plays into the overall arc of this series.

Off Limits Lovers continues with the scandal of Sterling Perry, Roarke’s father, being accused of running a Ponzi Scheme through his company Perry Holdings, and the mystery of determining the identity of the body discovered at the building site of the upcoming Houston chapter of the Texas Cattleman’s Club. These two issues do get resolved in this story. However, who killed the victim is still in question. The villain of this series appears via a monologue and sheds some light as to why the Currin and Perry families seem to be having problems of late. That monologue really has me wanting to read more of this series.